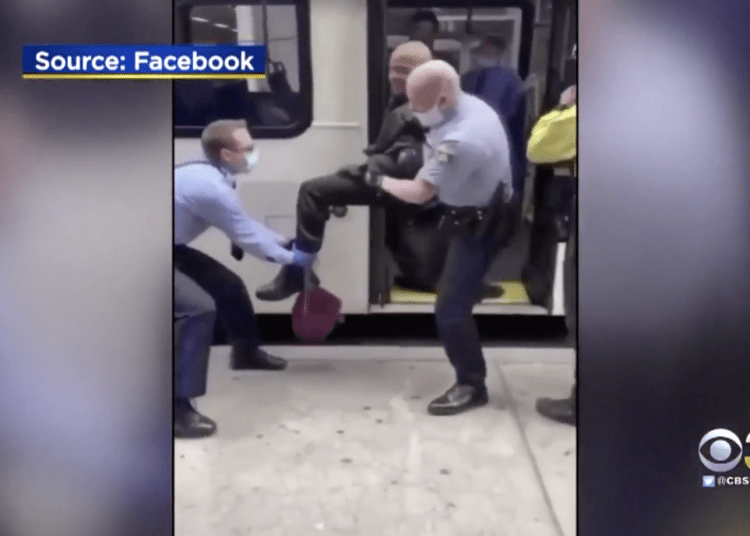 PHILADELPHIA — A man was physically removed from a SEPTA bus for not wearing a mask. SEPTA operators had the right to refuse to transport passengers that do not wear face masks, but after police forcibly removed a man from a bus on Friday morning, that rule has been rescinded.

A viewer alerted CBS 3 Philly to the video that was posted to social media. A rider was physically dragged off a SEPTA bus by police at 11th and Market Streets on Friday.

The bus driver called police because the passenger would not leave the bus.

The passenger was resisting, holding on as tight as he could, and refusing to get off.

It took about three officers to forcibly remove him by holding him by his arms and one leg to drag him outside the vehicle.

Before all of that took place, some sort of official boarded the bus telling everyone without a mask, that they had to exit or that police would physically remove them.

That one man didn’t get off and that’s why he was physically removed. The man was not arrested or cited.

The irony of it all

Ironically, as police departments across the country have modified their response to various calls for service in order to limit physical contact, they are increasingly being told to enforce newly enacted orders in the interest of public health. But at what cost to police, both in reputation and physical well-being?

What are we asking officers to do?

Do we really want officers forcibly removing a man from public transportation because he’s not wearing a mask? … Or issuing citations to drive-in churchgoers? … Or ticketing people watching the sunset from their personal automobiles? … Or father’s getting arrested while playing ball in the park with children? … Or ocean paddleboarders and surfers finding themselves in handcuffs for simply being on the water by themselves? … And the list can go on!

As usual, people who comply with police will rarely be in troubled water (i.e. paddleboarder), but we are demanding compliance with previously unfettered freedoms. Are these infringements of liberty really necessary?

The reality of optics

Most everyone agrees to willingly cooperate with social distancing, etc., and to relinquish our participation in social activity, for the most part. But the manner in which rules are being enforced can make it appear like we’ve become a police state. While that is not the goal, it’s an optic that is increasing every day.

Division within the ranks

Things are getting ridiculous. While there are no official polls, the LEO response to such stories seem to be mixed; some are sharply critical of the extreme mandates, while others support enforcement of the new directives regardless of cost. The division within police ranks can be stark at times.

Returning to the Philadelphia bus incident; in a statement, SEPTA says its main concern is the health and safety of its customers and employees.

The rider face-mask policy was part of SEPTA’s implementation of a “lifeline service plan” that started this week, after dozens of employees became infected with the virus. At least three of them died.

Local 234 forced SEPTA’s plan after complaining about too many passengers who were putting operators and other riders at risk by riding vehicles and taking non-essential trips.

While SEPTA urges riders to cover their faces, those who refuse will not be denied entry.

But on Tuesday, when asked about the new lifeline service schedule, which included the requirement all bus and subway passengers wear masks, SEPTA General Manager Leslie Richards said, “We’re going to enforce. Not only can an operator of a vehicle refuse a rider that does not have a mask on, we will also have members of our transit police making sure.”

After the viral video, SEPTA released a statement on the policy update.

“SEPTA yesterday started requiring customers to wear facial coverings to help prevent the spread of COVID-19. That policy will no longer be enforced. … While SEPTA urges riders to cover their faces, those who refuse will not be barred entry to the system,” the statement read in part.

Philadelphia Police Department is reportedly investigating the incident, CBS 3 Philly reported. This certainly creates some irony. What if the officers are found to be in violation of a terminating offense? … All while trying to enforce a mandate that did not lead to arrest or citation? This is foolish. I do not believe that officers should be placed in this vicarious position!

My personal philosophy was that if I had to physically restrain or remove a confrontational person, it would lead to arrest. Yet now we are finding many exceptions to this guideline, and it does nothing but expose officers and their organizations to additional civil liability. “No good deed goes unpunished,” right?

So this brings us to Easter Sunday. Many churches are trying to comply with social distancing requirements, while maintaining a sense of worship during the most revered holiday on the Christian calendar. As a result, they would like to have drive-in church. After all, people are allowed to interact in grocery stores, pick up lines at restaurants, gas stations, etc., why can’t people sit in their cars in a church parking lot and listen to their pastor deliver an Easter message?

Moreover, some jurisdictions have declared church service essential as long as social distancing is practiced, much like grocery shopping.

Sen. Rand Paul, R-Ky., is making the case, Fox News reported. He told Kentucky’s Gov. Andy Beshear to “take a step back” on Friday after the governor warned residents that they would be forced to self-quarantine for 14 days if they attended an in-person Easter church service — due to the risk of the spread of the coronavirus.

“Taking license plates at church? Quarantining someone for being Christian on Easter Sunday? Someone needs to take a step back here,” he tweeted.

Taking license plates at church? Quarantining someone for being Christian on Easter Sunday? Someone needs to take a step back here.

Kentucky Governor Announces Plan to Record License Plates of Easter Church Goers and Force Them to Quarantine for 14 Days https://t.co/z7U42liQRh

Beshear, a Democrat, announced this week that people seen taking part in mass gatherings — including in-person church services — would have license plate numbers taken, which would in turn be given to local health departments — who would force the offender to go into quarantine.

What will the storyline be after Easter? Stay tuned!