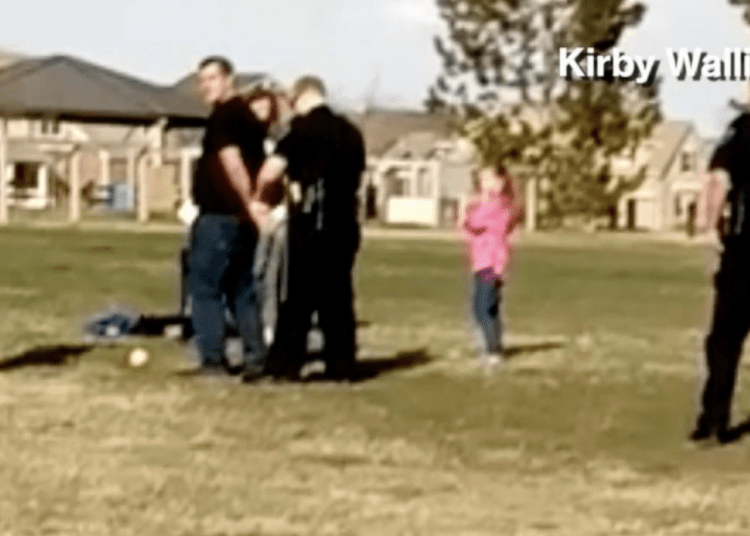 BRIGHTON, Colo. – A man identified as a former Colorado State Patrol trooper said he was handcuffed in front of his 6-year old daughter on a near-empty softball field Sunday by Brighton police officers enforcing social distancing rules. The department apologized Tuesday afternoon, calling the incident an “overreach by our police officers.”

Matt Mooney, 33, told ABC News he walked with his wife and daughter from their home to a nearby park Sunday to play softball.

“We’re just having a good time, not near anybody else. The next closest person is at least 15 feet away from me and my daughter at this point,” Mooney told ABC.

However, after playing in the park for a short period of time, police arrived, according to Mooney. Everyone was told to leave because the park was closed.

Mooney said he told officers that he was familiar with the posted rules and believed he and his family were in compliance and practicing proper social distancing. When asked for identification, he refused to provide it since he had not broken any law.

“Well, they didn’t like that idea. They then proceeded to make a threat against me saying, ‘If you don’t give us your identification, if you don’t identify yourself, we’re going to put you in handcuffs in front of your 6-year-old daughter.'”

“Yeah, it’s Sunday and the Brighton police are apparently arresting a dad for throwing a ball to his daughter,” Wallin is heard saying on the video.

Mooney said he was handcuffed and placed in a patrol car for about 10 to 15 minutes while officers phoned a supervisor for guidance.

In a statement, the Brighton Police Department said it was “deeply sorry” for the incident and is conducting an internal investigation.

“While the investigation sorts through the different versions of what took place by witnesses who were at the park, it is evident there was an overreach by our police officers,” the statement said. “It is imperative that we improve communication with our front line first responders so they are up to date on the latest rules in place regarding COVID-19 for addressing public safety.”

Mooney said he’s hired an attorney and is considering legal action against the city.

The former state trooper, who now runs a construction company, said officers eventually released him without issuing a citation.

Mooney said his 6-year-old daughter was scared to see her father placed in handcuffs, but said she learned a valuable lesson.

Mooney was bothered by physical contact, which he believed to be inappropriate. He said none of the officers were wearing protective gear, although he saw a face mask hanging from an officer’s belt.

According to ABC News, Mooney declined to comment on the apology.