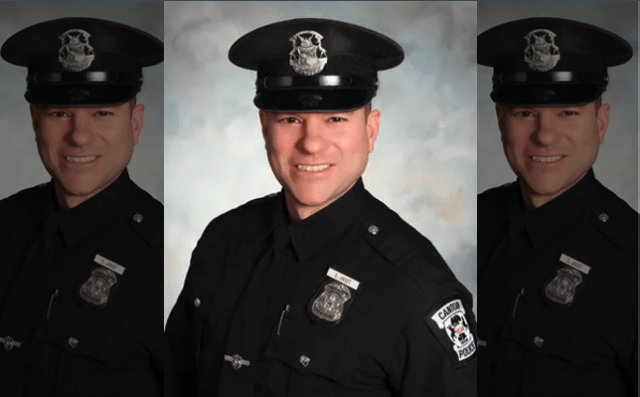 BRIGHTON, Mich. – A Canton Township police officer was shot and killed Monday morning at his home in Brighton, Mich., by his 18-year-old son, according to law enforcement authorities.

Police responded to a 911 call to the family’s home on Woodlake Drive about 10:28 a.m. on Monday. The victim’s teenage daughter placed the call for help in regards to a shooting, Brighton Police Department said.

The girl told emergency dispatchers that her brother shot her father and intended to take his own life, according to police, mlive.com reported.

Responding officers found Edward Jagst, 48, of the Canton Township Police Department, dead in his bed from a gunshot wound. The 18-year-old son fled the scene prior to police arrival.

After a period of time, the suspect’s mother arrived at the home. She had her son on the phone, which allowed officers a chance to talk to him. According to police, they were able to convince him to surrender.

Units from the Livingston County Sheriff’s Office and Michigan State Police located the suspect. They trailed him back to Brighton where he was taken into custody, mlive reported. Police recovered a weapon from the suspect’s vehicle.

Authorities did not disclose a motive for the homicide, if one is known.

Jagst was a 21-year veteran of the department. In 2016, he was among a trio of Canton Township school resource officers honored with the Model Agency Award by the National Association of School Resource Officers. Canton was just one of five agencies to be so honored that year, The Detroit News reported.

“We want to thank all the departments that assisted with this tragedy and our hearts go out to the family and the entire Canton Township Police Department for the loss of such a well-respected man and officer,” Brighton Police Chief Rob Bradford said.

The suspect was booked at the Livingston County Jail. He was not named since he’s yet to be arraigned.