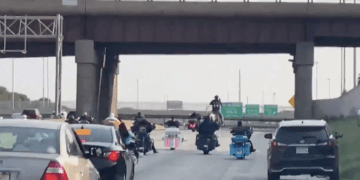 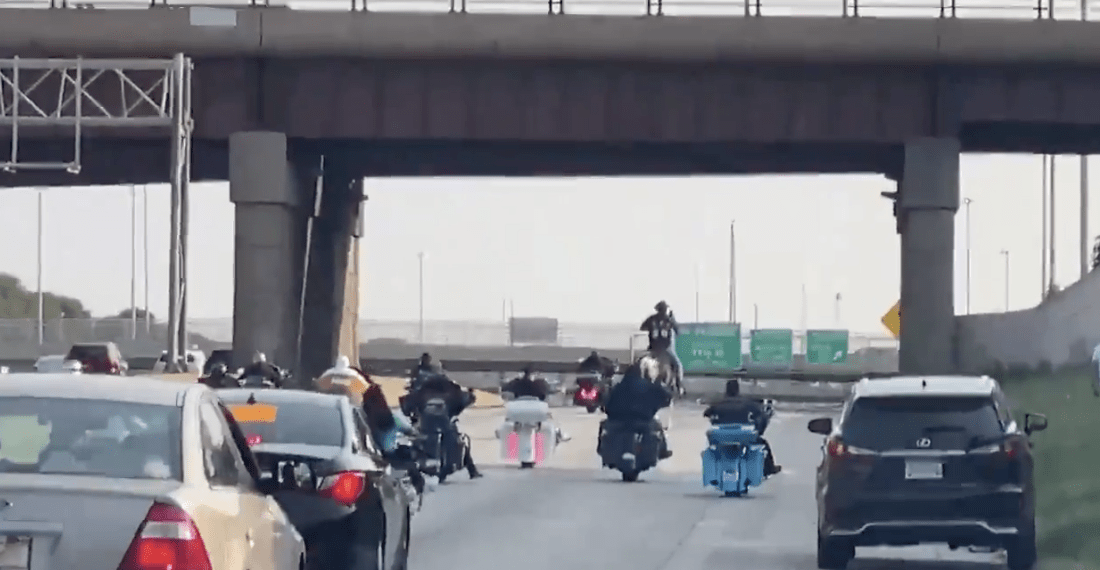 A man known as the 'Dreadhead Cowboy' was arrested for riding his horse on a Chicago expressway. (Twitter)

CHICAGO — A Chicago man known as the “Dreadhead Cowboy” was arrested Monday after riding a horse on the Dan Ryan Expressway, according to reports.

Adam Hollingsworth, 33, was captured on video surrounded by motorcycles and with police trailing behind. The wrangler was charged with reckless conduct, disobeying a police officer, and criminal trespass to state-supported property, police said.

He was escorted by a group of motorcyclists as he rode his horse on the southbound lanes of the expressway, sometimes at a gallop, for several miles, FOX reported. On a Facebook Live feed while he was riding, Hollingsworth said he wanted everyone to know kids lives matter.

“Until we understand kids lives matter, nothing else matters,” he said on Facebook Live before riding onto the freeway. “We’re fitting to shut down the whole Dan Ryan.”

In the past, Hollingsworth teamed up with Mayor Lori Lightfoot to advocate for filling out the Census. However, the mayor’s office distanced itself from the “stunt” in a statement.

“There is a right way and a wrong way to call attention to issues of great importance and this stunt was decidedly the very wrong way,” the statement said, according to the Chicago Sun-Times.

CHICAGO COWBOY: Video shows a man on a horse snarling traffic this evening on the Dan Ryan Expressway on the South Side. https://t.co/Yi7iO6AFCO **Video: Vashon Jordan Jr./@vashon_photo pic.twitter.com/nbHOnSqvc7

State police said they received multiple calls around 4:20 p.m., about a man riding a horse south at 47th Street. Officers arrived at 71st Street and saw Hollingsworth “surrounded by multiple motorcycles and vehicles in the local lanes” on the interstate, according to a statement by Illinois State Police.

“He shouldn’t have been on a horse on the expressway,” a state police spokesperson told the news organization.

Hollingsworth had previously met with state and Chicago police on Sept. 9 about a planned protest on the Dan Ryan Expressway. His request was denied because authorities said it was dangerous and illegal “for pedestrians to access the expressway in that manner,” according to state police.

But what about past BLM protests that have taken place on the expressway without police intervention? we wondered at Law Officer. Former Police Superintendent Eddie Johnson even participated in one a few years ago.

Nevertheless, once Hollingsworth was placed under arrest, troopers secured the horse, which was bleeding from the left hoof, had an injury on the right hoof, as well as, sores on the right side of its body from the saddle, the statement said.

At that time, state police said another man, identified as Darron Luster, 55, of Chicago, attempted to “forcefully gain control of the horse.” Officers asked him to release the animal, which Luster refused, and he was placed under arrest for obstructing and resisting arrest, according to state police.

Luster refused medical attention and stated he would only go inside a squad car, “not [an] ambulance,” police said.

The horse was taken to Animal Care and Control for treatment.