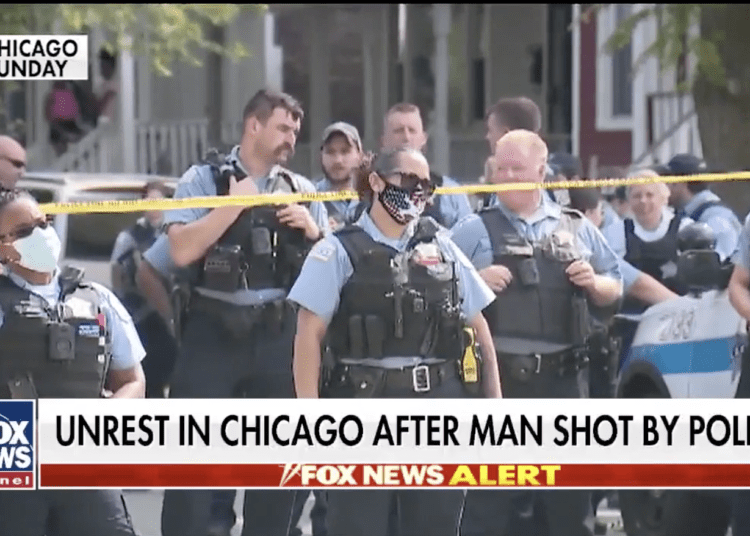 Social media users posted videos of hundreds of people looting stores such as Nordstrom, Walgreens, Macy’s, Coach, Gucci and Louis Vuitton. Some exchanged gunfire with police at one point, although no officers were injured.

“Absolute chaos in downtown Chicago with more overnight looting and vandalism in the Loop,” tweeted Ryan Baker, an anchor for WBBM-TV. “Appears to be coordinated effort with minimal police presence.”

Looters broke into a Chicago mall and are looting the place clean tonight. #BlackLivesMatter pic.twitter.com/wKJZbcvpoZ

The unrest began Sunday afternoon, after officers responded to a report of a man with a gun in the city’s Englewood neighborhood. While pursuing that individual on foot, he “turned and fired shots” at officers before being struck himself. As a result, the suspect was taken to a local hospital, Deputy Chief Delonda Tally told Fox 32 Chicago.

A crowd that had gathered at the scene then faced off against police and started hurling objects at officers after getting agitated over a false rumor that the suspect – who is in his late teens or early 20s – was a child, investigators said.

Police later tweeted an image of a gun they said they recovered at the scene.

Offender’s firearm recovered by police after firing at Officers. Officers returned fire striking the offender. Offender transported to U of C Hospital. pic.twitter.com/UQPmfP3a35

As of Monday morning, the suspect’s condition is unknown, while Chicago’s Civilian Office of Police Accountability has launched an investigation into the shooting. Three officers involved in the shooting also were taken to a local hospital for observation, Fox 32 reported.

The Chicago Police Department did not immediately respond to an email from Fox News.

Before long, the unrest developed into mass looting in the Magnificent Mile and other parts of Chicago’s downtown.

A look at the debris and damage outside the Best Buy store on Marcey near Clybourn/North pic.twitter.com/yCCKCFuCde

The Chicago Tribune reported that it observed people carrying shopping bags full of merchandise in the areas where the looting was happening and at least one U-Haul van was seen pulling up.

Officials told the news organization that several arrests were made and one gun was seized in connection with the looting. A rock also reportedly was thrown at a police car while anti-police graffiti was spotted in two locations.

The looting began around midnight, yet by around 3 a.m. police appeared to be getting it under control, the Chicago Tribune reported.

Illinois State Police told WMAQ they were called in to help block off expressway ramps going in and out of the Loop area in order to prevent looters from fleeing the scene.

Looting continues this morning. This is the Apple Store at Clybourn/North being hit again around 4:30 a.m. pic.twitter.com/xwpiHt5wDQ

The Chicago Transit Authority also tweeted that all bus and train service going into the city’s downtown areas was “temporarily suspended at the request of public safety officials.”

The unrest capped off another violent weekend in Chicago that included three deaths. At least 35 people were shot, Fox reported.

From Jan. 1 through the end of July, 440 homicides took place in Chicago and 2,240 people were shot, including many of those who were killed, according to statistics released Saturday by the police department.

This compares to 290 homicides and 1,480 shootings, including people who were killed, in the first seven months of last year.

President Trump recently announced he would send federal agents to Chicago to help local authorities fight crime as part of an operation that started last year.

Chicago Mayor Lori Lightfoot pushed back in a letter to the White House, writing: “We need you, as president, to take a leadership role in enacting meaningful and common-sense gun legislation, which you so far have refused to do.”