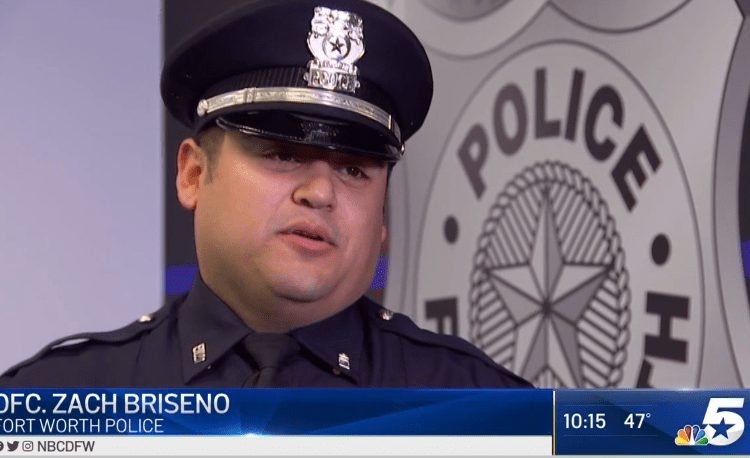 Zach Briseno, a double-amputee, graduated from the police academy in Fort Worth on Friday. (NBCDFW)

FORT WORTH, Texas — An Iraq War veteran who lost both his legs in a roadside bombing in 2007 became a Fort Worth police officer Friday.

Zach Briseno, who now stands tall with prosthetic legs, was among 24 graduates of Class 148 after he passed every rigorous physical test that other recruits were required to complete.

“I’ve wanted to be a police officer since I was a kid,” he said.

Briseno wanted to be a U.S. Marine, too, so he did that first, NBCDFW reported.

While serving his second tour in Iraq, in 2007, his Humvee hit a roadside bomb.

He thought he was going to die and told his buddies to get a message to his 2-year-old son back home.

“I just remember telling them, ‘Hey, tell my son I love him,’ because he was the only child I had,” he said.

As a result, he was awarded a Purple Heart by President Bush.

At first, he thought his dreams of becoming a police officer – or doing much of anything — were over.

But he soon received new prosthetic legs, and started a new life, which led back to his childhood dream of becoming an officer.

He walks without a noticeable limp and ran miles and did other physical activities as part of his training, according to NBCDFW.

“That part of people saying it’s a disability, that’s all in your mind,” he said. “You’re psyching yourself out at that point if you say, ‘I have this problem.’ No. How bad do you want it? How hard do you want to work for it?”

So, he worked hard to make it through the academy – despite another challenge, COVID-19.

He contracted coronavirus and was hospitalized for 10 days. Nevertheless, once healthy, the man with a warrior mentality returned to his training and barely missed a beat.

At police graduations, instructors give an award to the most dedicated and determined recruit.

Class members honor one of their own with the “most respected” award.

Briseno, now a father of four, received both, the news organization reported.

At the end of the ceremony, his family helped him pin on his new badge, including his now 15-year-old son — the one who was just two when his dad lost his legs.

One of his Marine buddies, who was with him that night, flew in for the event.

Soon, Briseno will patrol the streets of Northwest Fort Worth.

Briseno said the lesson of his experience is simple.

“Don’t give up,” he said. “Leave the past in the past and keep moving forward. Our time tomorrow isn’t always promised. You’ve got to make the best today.”

He is the second double amputee to be a full-time police officer in the country, the department said.

In 2017, Matias Ferreira, an Afghanistan war veteran, graduated from the Suffolk County Police Academy in Brentwood, Long Island. At the time of his graduation, he good-naturedly told local media that he wasn’t worried about breaking a leg on the job.

“If I break my leg I go the trunk of my car and put on a new one and I’m back on duty,” he said, no doubt with a smile on his face.