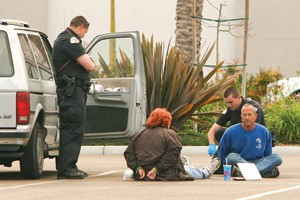 Most officers know the stats: Domestic disputes are the most dangerous calls they respond to. And they’re right.

The latest statistics from the FBI Uniform Crime Reports again show the single largest category for officer assaults is response to domestic calls (30.5 percent). And most officers know why.

The traditional domestic dynamic reveals that in any call involving family troubles, there are usually two principal players involved: the victim (usually the abused spouse) and the suspect (the abuser). As soon as you, the officer, arrive on scene, the dynamic changes. A third element is now injected into the scenario: the rescuer. Of course, what most cops hope for is that you and your partner can get the principals separated, get things calmed down, arrest the abuser and in essence rescue the victim.

However, what often happens is a change in dynamics and labels shift. The abuser now is seen as the victim, you are now viewed as the abuser and the only vacancy left the rescuer slot is filled by the abused spouse, who turns on you to rescue their abuser-spouse. The stage is set for a double-team assault.

So, what can you do to lessen the chance for a violent confrontation when you receive the domestic-violence (DV) call?

Two Is Better
First, always respond with a backup or two. When I was wearing the shirt, both as a sergeant and lieutenant, I routinely would respond as the third unit to DV calls. I had worked for supervisors who showed up at potentially violent calls only to take a spectator position in their squad cars, watching and waiting until something happened. I made it clear when I took the promotion to boss that when I showed up on the scenes of high-risk events, I would be there first and foremost as my officers backup. So, it was fairly common for three of us (the primary, secondary and moi) to roll in on DV calls.

Not every municipality has that luxury. Sometimes your backup can be miles away. If so, you wait. Suicide is not part of your job description. On DV calls, always go in with a backup!

Next, separate people for the interviews. The nice thing when I was on the job was I could be the silent backup while each officer spoke with one party. Use active listening and verbal defusing techniques to calm things down. Nowadays, arrests are the recommended resolution for most DV calls.

And do some digging. Even if there isn’t visible evidence of a battery, such as a clear injury, most state DV guidelines recognize that property damage directed at the victim is sufficient to support a DV arrest. If probable cause exists, make the arrest.

The International Association of Chiefs of Police (IACP) National Law Enforcement Policy Center (NLEPC) publishes DV guidelines. These are very clear in saying that in addition to bodily injury (or threat of imminent bodily injury), sexual battery, physical restraint, violation of a protective order and property damage directed at the victim constitutes a DV assault. Follow your standard officer-safety protocol when making that arrest. Wait for sufficient backup if the suspect looks like the WWE heavyweight champion.

Following Protocol
Third, respect the dignity of the principals. The IACP/NLEPC recognizes that same-sex communal relationships fit the definitions for the DV protocol. Stay focused on the mission regardless of your personal opinions of same-sex relationships. However, never drop your guard just because you re dealing with homosexual or lesbian couples. Relationships, regardless of gender, can prove volatile irrespective of the sex of the parties. Along the same lines, don’t drop your guard when taking the female player into custody.

Also, don’t look at DV calls as routine. Most readers of Law Officer or former students of mine know routine is not a word in my dictionary. I recall more than a few DV calls I went on, in both my capacity as a street dog and boss, that didn’t appear at first blush to be what I thought. Spouses who fight back for a change against their long-term abusers should always be viewed as victims, not suspects.

Do some checking with your department’s records division or BCI. What you’ll likely find are a few prior calls and reports (with or without arrests) that list the abused spouse as a victim of DV. Just because the abuser has a few scratches on his face or arms, don’t assume he’s the victim and go on autopilot. Conduct a thorough investigation just as you would for any other felony. Last, at the risk of offending some of my fellow NRA members, I strongly suggest officers impound any and all firearms (or other obviously deadly weapons) at the scenes of DV calls if the laws and policies in your area permit doing so. I can’t get into specific details because I’ve been retained as an expert in a DV case, but like my buddy Sergeant Steve Albrecht (ret.) from the San Diego Police Department says, Leaving a loaded gun in a chronic DV household is like parking a Corvette in front of a halfway house with the keys in it. You’re just asking for trouble.

This is not a Second Amendment issue like the debacle in New Orleans after Hurricane Katrina when officers were ordered by their mayor to round up all the guns in town like a bad scene from an old B-grade Western movie. We’re talking about what may be imminent to immediate danger. Let a judge decide if and when they should be returned.

Speaking of weapons, remember, you’re playing in somebody else’s ballpark. I know one veteran officer, who as a matter of practice and custom, never conducted DV interviews in the kitchen or the bedroom of the home. Kitchens are a haven for all kinds of items that can be used as weapons knives, meat cleavers, serving forks, etc. and if there’s a gun in the home, it’s likely to be in the bedroom nightstand, he says. A lesson learned from experience, no doubt. Central locations like the living room, family room or dining room are best. My cover officer can keep his eye on me and if the defecation hits the ventilator, additional back-up arriving will see me as they come through the door.

This month’s Tactics column is titled Domestic Violence Calls and is intended to be a tactical response piece. Time and space limitations just don’t permit me to get into all the additional procedures officers need to follow when investigating DV calls, such as documenting all injuries with photographs, conducting neighbor/witness interviews, providing the victim with battered spouse shelter contact info. or the importance of preparing a full and complete report. Indeed, those issues remain important.