And it’s not covered as a LODD 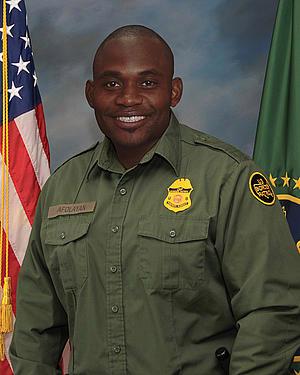 BORDER23a Agent Nathaniel A. Afolayan, of San Jacinto, died on May 1, 2009. He was 29. The day before Afolayan died, he was training at the Border Patrol Academy in Artesia, New Mexico, when he suddenly collapsed. He had just completed the 1 1/2mile run portion of his physical techniques final exam, the release said. (05/18/2011, Submitted to The Press-Enterprise)

When Lisa Afolayan kissed her husband goodbye as he headed off to the Federal Law Enforcement Training Center in Artesia (NM) little did she know that her life would turn into 11 ½ years of hell.  As Border Patrol Intern Nathaniel Afolayan was nearing the end of his training, Lisa Afolayan had to make the haunting decision to take her husband off life-support on May 1, 2009.

Their daughters, Natalee and Lea, were 3 and 18 months; and in 11 ½ years since their father’s supreme sacrifice, her and her children have been denied recognition three times by the Public Safety Officers Benefit Program (PSOB) at the Department of Justice. “Our girls are now 13 and 15, and I’m still battling to receive the Public Safety Officers Benefit following Nate’s line-of-duty death,” says this surviving law enforcement spouse. 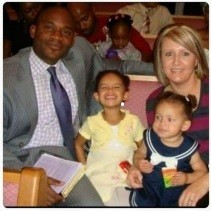 Nathaniel Afolayan died from rhabdomyolosis (rhabdo), a little-known condition that is brought on by overexertion, heat stroke, and/or severe dehydration.  So, what is Rhabdomyolosis (rhabdo)?  Rhabdo develops within the body following intense physical training and/or severe dehydration.  At some point, the skeletal muscles of the body spew a toxin into the blood stream that attacks and damages vital organs of the body, often resulting in death.  Rhabdo deaths have also claimed the lives of military personnel, athletes, firefighters, etc.

The Public Safety Officers Benefit Program was initiated in 1975 to recognize the sacrifice of slain officers and provide financial support for their surviving families.  Over the years, the criteria expanded to include accidental deaths, heart attack/aneurysm deaths, and, most recently, COVID-19 deaths.

Heart attack deaths were included in the PSOB regulations years ago with a “presumptive clause” which states that if an officer has responded to a non-routine call, and dies from a heart attack within a 24-hour period, that death is “presumed” to have occurred because of the law enforcement action taken.  COVID 19 deaths are the most recent deaths added to coverage for Federal death benefits through PSOB.  There could be 300 law enforcement officers losing their lives to COVID this year.  Rightfully so, it is “presumed” that these officers contracted the disease while performing law enforcement functions.

Even though the discussion on including training deaths in PSOB regulations started over 7 years ago and there may be one or two of these training deaths every year, the efforts to recognize these deaths as being “in the line of duty” have been unsuccessful, and the paperwork on 5-10 rhabdo deaths is sitting on someone’s desk at the Department of Justice.  Research, however, proved that in 1988, a PSOB claim was paid when an academy cadet died from kidney failure after intense training.  Two other claims were paid in the 2000’s after an ICE Agent and a municipal police officer died of rhabdomyolosis following SWAT trainings.

Those PSOB determinations were “precedent-setting” and the training deaths that followed should also have been approved.  But, apparently, no one at Justice sees the fatal connection between overexertion during intense training and death by rhabdo!   Yet, as it should be, officers who lose their lives in crashes returning from trainings are considered as killed in the line of duty and the PSOB death benefit is paid to their surviving families.

The PSOB regulation cites:  “Traumatic injury means a condition of the body caused by a specific event or incident, or series of events or incidents, within a single workday or shift. Such condition must be caused by external force, including stress or strain, which is identifiable as to time and place of occurrence and member or function of the body affected.”

PSOB has determined that Nathaniel Afolayan’s death, and several other deaths similar to his, do not meet the criteria for Federal death benefits.  All these officers died following extensive, intense training in police academies or SWAT trainings; yet PSOB does not recognize rhabdomyolosis as a “traumatic injury”.  The majority of these fallen officers had been sworn in, had medical examinations prior to being hired, were exceptionally physically fit, and were being paid during the trainings; they were doing their job on the day they developed rhabdo.  Death certificates list “overexertion, severe dehydration, heat stroke and/or rhabdomyolosis” as contributing factors to their deaths.

Yet, PSOB does not acknowledge a toxin that attacks and damages vital organs, causing death as a traumatic injury.  If they hadn’t gone to work that day, they could be alive today!

PSOB denied the Afolayan claim for benefits three times and the Afolayan family’s only recourse is to file an appeal to the U.S. Court of Appeals while several other rhabdo claims remain “under review” the Department of Justice.

And some of those deaths occurred over 10 years ago.

During the up-coming holidays and the for the eleventh time at the Afolayan’s home, Lisa Afolayan will be spending time going over the paperwork regarding her husband’s death.  She will be preparing for her last effort to secure the PSOB claim for her husband’s sacrifice.  She must file with the U.S. Court of Appeals in the Federal Circuit by December 14 to plead for a reversal of the third and final PSOB determination.  Once again, she will go through the emotional upheaval that has kept her from moving on. 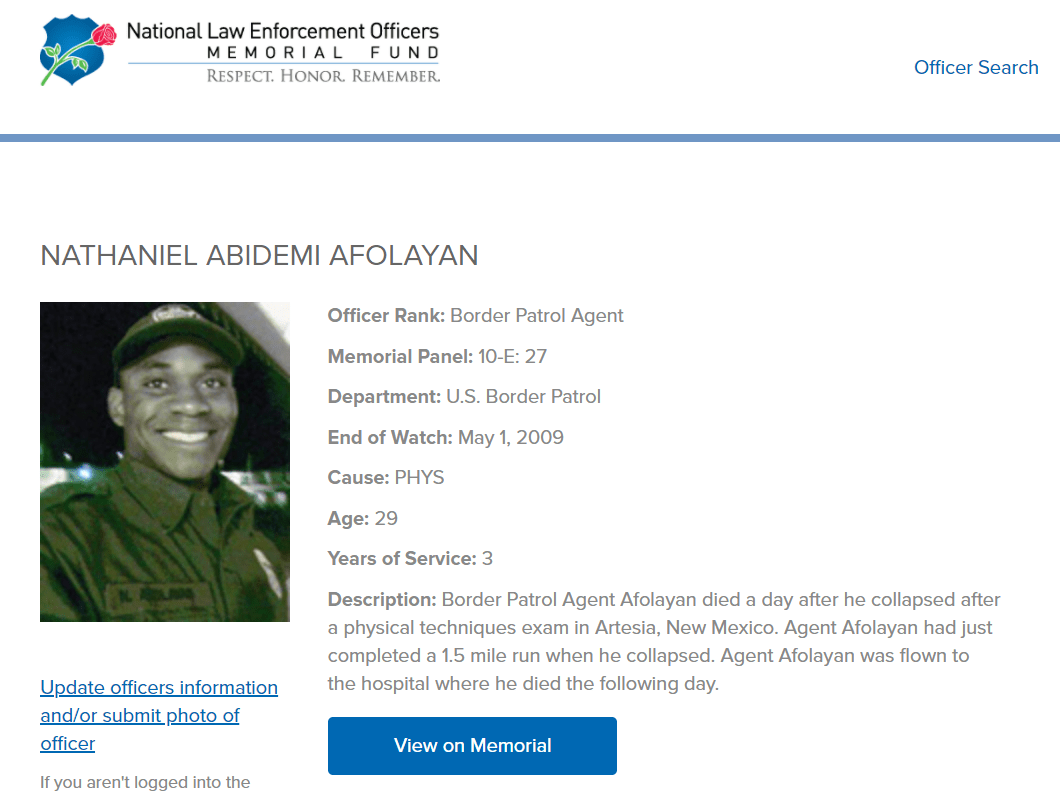 We all know law enforcement is a dangerous job; we all know academy training sessions are intense and demanding.  SWAT training is comprised of younger, exceptionally fit individuals who take on one of the most demanding jobs in law enforcement.  They are willing to give their all to train to be the best officer possible; so when they die in these training sessions, they should be honored for their supreme sacrifices……just like all the other officers who have laid down their lives to serve the citizens of our Nation.

When asked why Lisa Afolayan has chosen to embark on a Court battle with PSOB over her husband’s death, she said, “This is something I would never want another law enforcement family to go through.  Nate was athletic and exceptionally fit when he went to FLETC, he excelled in physical agility training, and was chosen to speak at his class’s graduation.  But only a few days before that graduation, I found my husband on life-support equipment because of rhabdomyolosis.  Perhaps going to Court will bring this issue to the forefront and officers who died because of intense training will finally be recognized as dying in the line of duty like their brothers and sisters who also sacrificed their lives serving their country.

Nathaniel Afolayan and others who died from rhabdo deserve the title of hero!”

Suzie Sawyer is the Executive Director Emeritus for the Concerns of Police Survivors, Inc.

Share and speak up for justice, law & order...
Tags: department of justiceexclusiveOfficer Downpsobrhabdorhabdomyolosis