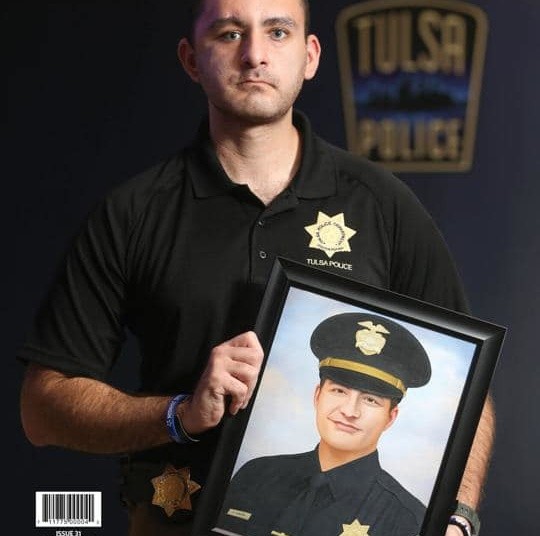 Tulsa (OK) Police Officer Aurash Zarkeshan and Tulsa Police Sergeant Craig Johnson have been named as the “Tulsans of the Year.” The award, announced by the Tulsa World, came after both officers were shot in the head after stopping a vehicle on June 29, 2020.

Zarkeshan, who has been called “Tulsa’s Hope” was not expected to survive. After months of grueling physical therapy and multiple surgeries, “Zark” as he is known in the halls of the department is not only back to work in a light duty capacity but he is expected to make a full recovery and return to the streets.

Returning to work was never in doubt for Zarkeshan. A rookie cop with just a few months on the street, he laid in the hospital and could only squeeze a hand to communicate as his body fought the life threatening injuries that evil had placed on him.

Telling the Tulsa World in an exclusive interview,  “My friend asked me once if I still wanted to be a police officer.”

“In reply, Zarkeshan gave him one really firm squeeze of his hand.”

That meant a resounding “yes.”

According to Zarkeshan, “I knew I was coming back.”

Sharing his thoughts on social media about Officer Zarkeshan, Tulsa Police Chief Wendell Franklin said that he had “…to laugh at the national attention given to a professional athlete injured during a sport. Look at this man. Look at the men and women who have left a piece of themselves on the battlefield. When you understand true sacrifice, perhaps then you’ll understand the word hero, service, and courage.”