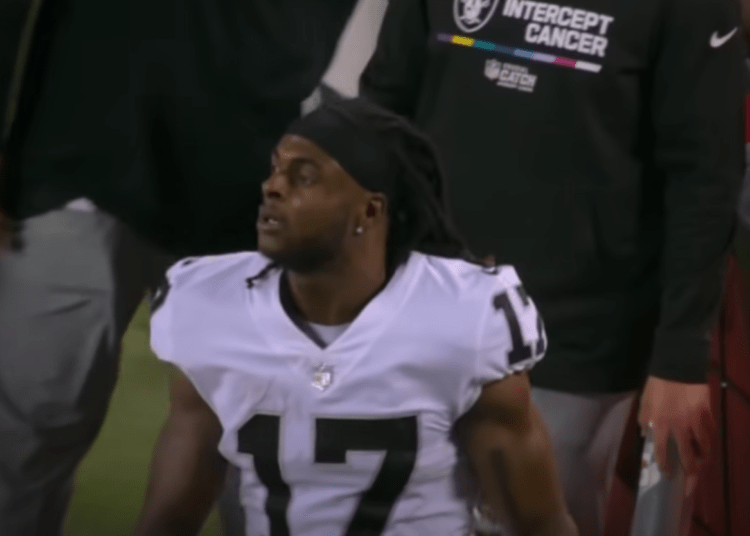 Adams was issued a citation on Wednesday by the Kansas City Municipal Court alleging that he “did, by an intentional, overt act, inflict bodily injury or cause an unlawful offensive contact upon [the victim] by pushing [him] to the ground using two hands causing whiplash and head ache, possible minor concussion,” KCTV5 reported.

Adams has an online court date scheduled for Nov. 10, according to the New York Post.

KANSAS CITY, Mo. – The football game was over Monday night and Davante Adams was furious as he headed toward the locker room. His team, the Las Vegas Raiders, had just suffered a heartbreak 1-point loss to the Kansas City Chiefs when he was caught on camera delivering a “late hit” to a credentialed camera operator who reportedly got in his way.

Just moments prior, the Raiders’ star receiver collided with a fellow teammate, wide receiver Hunter Renfrow, on a failed fourth down attempt. The ball sailed over their heads as they fell to the ground and a chance at victory went up in smoke.

The camera operator, who was holding a tall piece of equipment, appeared in the player’s path as he left the field. Adams gave the man a two-handed shove, knocking him to the ground, following the Raiders wild 30-29 loss. The camera operator was helped back to his feet by a security guard, the New York Post reported.

Adams paused for a moment and stared at the man before proceeding to walk into the tunnel.

Raiders’ WR Davante Adams moments after the Raiders loss to the Chiefs: pic.twitter.com/lEjoOHS7x2

It was unclear if the man suffered an injury or sustained any damage to his equipment.

During a post-game interview, Adams apologized for knocking the man down. He also tweeted an apology.

“Sorry to the guy I pushed over after the game,” Adams later tweeted. “Obviously very frustrated at the way the game ended and when he ran infront of me as I exited that was my reaction and I felt horrible immediately. Thats not me..MY APOLOGIES man hope you see this.”

Sorry to the guy I pushed over after the game. Obviously very frustrated at the way the game ended and when he ran infront of me as I exited that was my reaction and I felt horrible immediately. Thats not me..MY APOLOGIES man hope you see this.

Adams is facing discipline from the league — potentially even a suspension — for pushing the credentialed worker to the ground, NFL Network Insider Tom Pelissero reported, per sources.