A second officer was injured 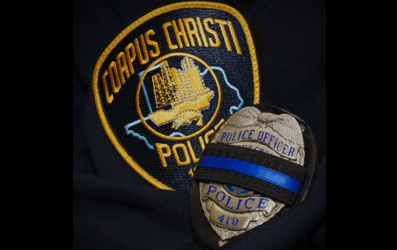 CORPUS CHRISTI, Texas – Corpus Christi Police Department has lost one of their police officers to a traffic fatality. A seven-year veteran of the agency was killed during a Friday night traffic stop and another was injured.

“A vehicle struck one of the units, causing injury to two officers,” he said.

One of the officers died from his injuries, the other is in stable condition, Pena said.

Pena did not release the name or rank of the officer, but said he has been with the department for seven years, Caller Times reported.

One person had been detained as part of the investigation, Pena said. However, it was not known if the individual would face any charges.

By Friday night, all of the department’s social media pages had images of their badges with a black band and a thin blue line.

Saturday morning the police agency shared their loss on Twitter. “Please keep the fallen, the injured, the family and all officers in your prayers,” they wrote.

Senior Officer Gena Pena, a spokeswoman for the department, said officials will not be releasing details about the crash at this time, according to the report.

“We are mourning the loss of a fallen officer and would like to give the family time enough to grieve,” Pena said. “When we have more details to share about the accident, we will inform the public as soon as possible.”

Pena said officers are continuing to investigate the cause of the crash.

Alan McCollum was identified as the officer who died. Michael Love was the injured officer. The driver that took the life of McCollum and injured Love on Friday is in custody, per police. Read more.