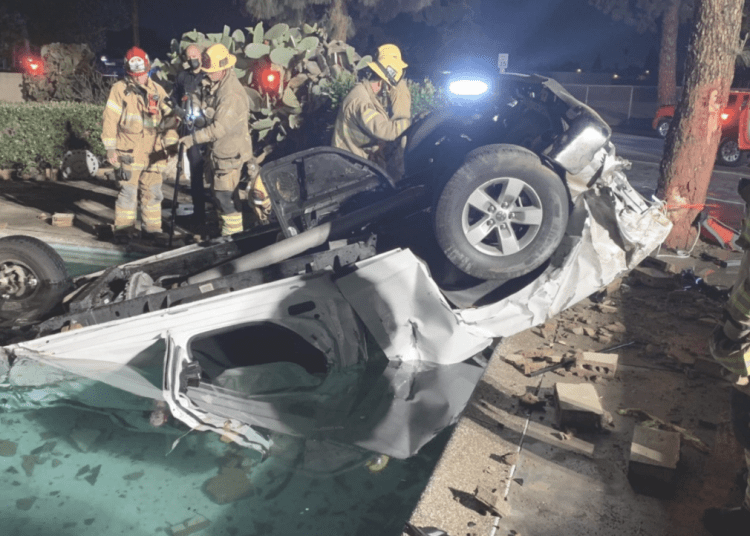 Two people were killed in a collision in Garden Grove, California. One of the vehicles plowed through a block wall and landed in a pool. (Orange County Fire Authority)

GARDEN GROVE, Calif. — Two drivers were killed in a crash that sent one of the vehicles through a wall and into a swimming pool in Garden Grove Friday morning, authorities say.

The deadly collision occurred near the intersection of South Euclid Street and Orangewood Avenue at about 2:15 a.m., the Garden Grove Police Department said in a news release.

Police initially observed a Dodge Ram pickup truck driving at a high rate of speed through a parking lot nearby, KTLA reported.

Patrol units running lights and sirens attempted to stop the truck but it continued westbound on Chapman Avenue, according to the police agency.

The pickup truck eventually crashed into a second vehicle as the driver was going through the intersection at Euclid and Orangewood.

The pickup truck then sheared a hydrant and crashed through a wall before landing in a swimming pool.

The second vehicle overturned in the street, the Orange County Fire Authority stated in a tweet.

The driver of the pickup truck was pronounced dead at the scene. The driver in the second vehicle was taken to a local hospital, where he later died, Garden Grove police said.

Neither of the drivers has been identified.

Update: Plan being developed to remove vehicle from pool to confirm number of victims in vehicle. pic.twitter.com/yONsjB1QIH

The intersection of Euclid and Orangewood was closed for several hours as traffic officers investigated the double fatality.