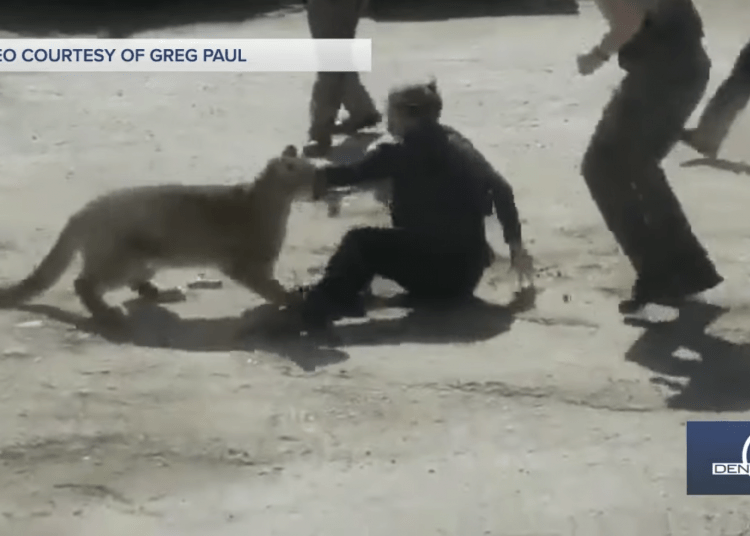 LARIMER COUNTY, Colo. — When a 91-pound mountain lion exploded from its crouched position under a trailer and launched at Larimer County Sheriff’s Deputy Michelle Ross, she had a split second to fire a shot before the animal ripped into her right arm and tackled her to the ground.

And in that split second, when the powerful mountain lion sprang 10 feet, she had one quick thought, reported the Coloradoan.

“It was kill or be killed,” the deputy said of the Wednesday attack. “The minute you think you’re going to die, you die. That cat made up its mind it wanted to kill me. It was six inches from my throat.”

Instead, when the male mountain lion took her to the ground in the Riverview RV Park west of Loveland, she briefly wrestled with it before Larimer County Parks Ranger Chris Gardner kicked the mountain lion. The lion fled and was fatally shot a short time later by wildlife officers at a nearby house.

“It was kill or be killed. The minute you think you’re going to die, you die. That cat made up its mind it wanted to kill me. It was six inches from my throat.”

Ross suffered puncture wounds on her right arm. She credits Gardner and her protective vest for saving her from further injury, if not saving her life.

A necropsy revealed the lion had rabies, forcing Ross to receive a series of rabies shots at Medical Center of the Rockies in Loveland.

Gardner said he couldn’t shoot at the mountain lion when it attacked because there was an occupied camper trailer in his line of fire. And he wasn’t about to shoot when the wild animal was biting Ross. Therefore, he did the next best thing.

“I had my weapon in my hand so I couldn’t get my taser or baton,” said the seasonal ranger who is training to become full-time. “We are trained in kicks for people and animals, so that’s what I did.”

Gardner wasn’t the only hero in the incredible story, according to the Coloradoan.

UPS driver Alex Rodriguez was making a delivery to a home in the area. He was talking to a construction worker at the residence, described by the sheriff’s office as a 57-year-old Fort Collins man, and then went to jump into his delivery truck. That’s when he saw the mountain lion on top of the man.

Rodriguez picked up a piece of pallet wood and started hitting the mountain lion, which fled and took off down the hill. Then he called 911.

“I didn’t want the guy to die,” said Rodriguez, who finished his route after fending off the mountain lion, an act the victim said saved his life. The man, who authorities have not identified, received injuries not believed to be life-threatening. He is also receiving rabies treatment.

They said they didn’t want to kill the mountain lion but that it gave them no choice.

Kirby said she knew there was something wrong with the mountain lion when she and Gardner saw it come from the house where it attacked the man. It came down a hill and walked directly toward two RV park employees in a golf cart.

“That cat looked at Ross and decided she was the best option, and it was on from there.”

The mountain lion crawled under the first trailer in the RV park, not far from where children were riding their bikes. The commotion of officers chasing the mountain lion drew the interest of campers, who took video of the tense scene unfolding, reported the Coloradoan.

“Don’t tell me God’s not real. He had a different plan for me that day.”

“That cat looked at Ross and decided she was the best option, and it was on from there,” the trooper said. “We weren’t there just to shoot that cat. If it would have gone down the riverbed, we would have just followed it. Instead we had to protect anyone else from getting hurt.”

And for that, Ross is thankful.

“I feel extremely lucky,” she said. “Don’t tell me God’s not real. He had a different plan for me that day.”