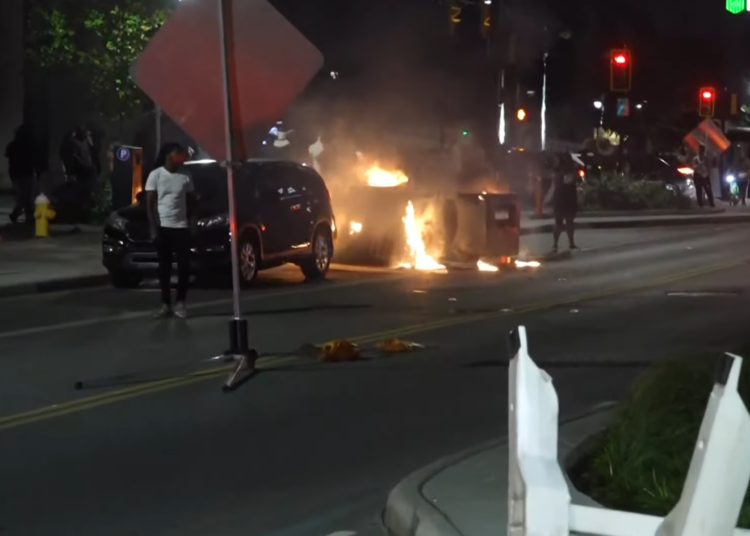 AKRON, Ohio – Civil unrest erupted in Akron, Ohio, Sunday, after police released bodycam video of the recent officer-involved shooting of Jayland Walker. The heated demonstrations have been held around the city since the June 27 police shooting of Walker, but they intensified Sunday after police made the video public.

Video captured police officers dressed in riot gear and carrying shields taking a stand against angry protesters, who could be heard chanting, “F*** the police,” “Justice for Jayland” and “We are done dying,” reported News 5 Cleveland.

Other videos depicted police officers deploying what appeared to be a dozen cannisters of chemical irritants in an effort to disperse the crowd after someone had knocked over barricades around the Akron Justice Center, according to WKYC.

During the unrest, agitators blocked traffic in the Highland Square and West Akron sections of the city. Moreover, someone set a dumpster on fire and smashed windows of plows used to close off streets, the New York Post reported.

The chain of events involving the controversial OIS began early last Monday morning after officers tried to stop Walker on an unspecified traffic violation, but he failed to yield, leading police on a chase, Chief Steve Mylett said. Less than a minute into a pursuit the sound of a shot was heard from the car and a transportation department camera captured what appeared to be a muzzle flash coming from the vehicle, Law Officer reported.

Consequently, Mylett emphasized the gunfire changed the nature of the case from “a routine traffic stop to now a public safety issue.”

A few minutes after the weapon was discharged, Walker’s vehicle slowed and he jumped out of the car as it continued rolling, police said. As he leaped from the moving car he was wearing a ski mask while running from pursuing officers.

According to authorities, officers fired after fearing Walker was preparing to fire at them, Fox reported.