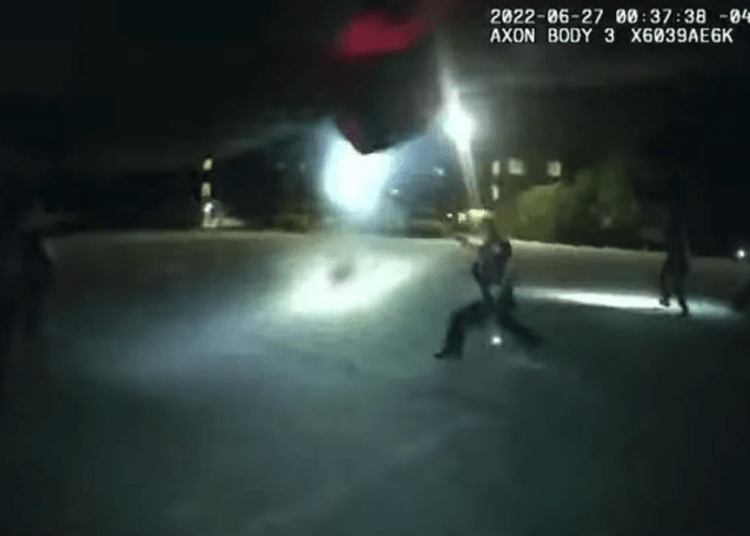 AKRON, Ohio – The Akron Police Department released bodycam footage on Sunday showing officers involved in the fatal shooting of Jayland Walker, 25, who reportedly fired at police during a chase and then bailed from a moving vehicle prior to the shooting last week.

The chain of events began early Monday morning after officers tried to stop Walker on an unspecified traffic violation, but he failed to yield, leading police on a chase, Chief Steve Mylett said. Less than a minute into a pursuit the sound of a shot was heard from the car and a transportation department camera captured what appeared to be a muzzle flash coming from the vehicle.

Consequently, Mylett emphasized the gunfire changed the nature of the case from “a routine traffic stop to now a public safety issue,” Fox News reported.

A few minutes after the weapon was discharged, Walker’s vehicle slowed and he jumped out of the car as it continued rolling, police said. As he leaped from the moving car he was wearing a ski mask while running from pursuing officers.

According to authorities, officers fired after fearing Walker was preparing to fire at them, Fox reported.

Investigators not only found a handgun and a loaded magazine on the seat of the car, but found a shell casing consistent with the weapon, according to Fox.

“Each officer independent of each other related that they felt that Mr. Walker had turned and was motioning and moving into a firing position,” he said.

As the investigation continues, Akron police have pleaded for peace and patience from the community. Mylett said he is withholding judgment on their actions until they give their statements, and he said the union president has told him that all are “fully cooperating” with the investigation.

Eight police officers were involved in the shooting. Per normal protocol, they were placed on paid administrative leave.

The Ohio Attorney General’s Bureau of Criminal Investigation is leading the probe of police use of force, Law Officer reported.