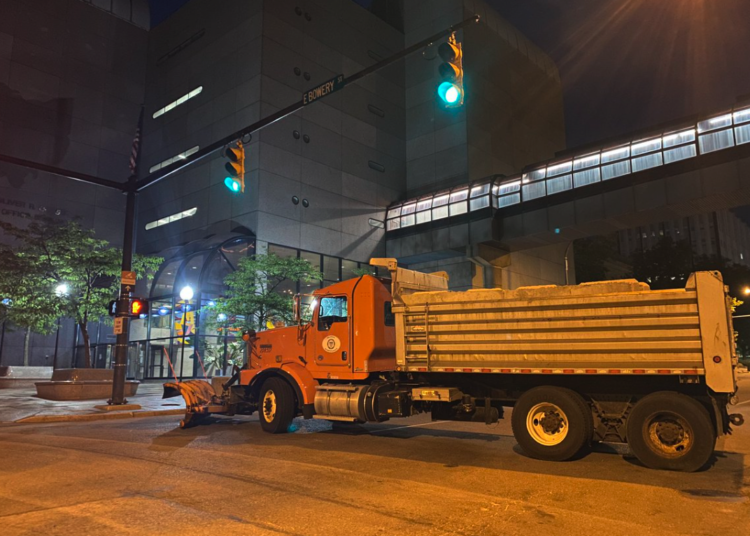 Authorities in Akron are bracing for civil unrest. (Twitter)

Snow plows and other large trucks, meant to be street barriers, were moved downtown overnight in preparation for large demonstrations following the fatal shooting of Jayland Walker, NBC News reported.

“We are planning for a possible gathering for demonstrations and ensuring continuity of services are provided to the entire community, including areas in and around downtown,” Akron police Lt. Michael Miller, a department spokesperson, told NBC News in a statement on Friday.

“We are utilizing various tools and such in the event barricades are needed.”

With the potential of unrest in Akron, snow plows are being used as street barriers surrounding the area of the Akron Police Department. This in the wake of the shooting death of 25 year old Jayland Walker. I have details this morning on @wkyc pic.twitter.com/cnre5r8Vfm

The deadly encounter has also prompted Akron to cancel a Fourth of July festival, as Mayor Dan Horrigan said now “is not the time for a city-led celebration.”

However, the motorist failed to yield and police engaged in a vehicle pursuit, according to an Akron Police Department statement.

During the pursuit, officers “reported a firearm being discharged from the suspect vehicle,” police said.

After pursuing officers radioed to dispatch that shots were fired from the suspect vehicle, the pursuit continued. Police provided the following statement:

“The pursuit continued for several minutes until the suspect vehicle slowed down near the intersection of E. Wilbeth Rd. and Clairmont St. While the vehicle was still moving, the suspect fled from the vehicle on foot. Officers engaged the suspect in a foot pursuit in order to apprehend him. The suspect ran northbound into a nearby parking lot. Actions by the suspect caused the officers to perceive he posed a deadly threat to them. In response to this threat, officers discharged their firearms, striking the suspect.”

Officers called for EMS and began to administer emergency medical aid. However, the suspect was pronounced dead at the scene, authorities said.

According to police, a gun was later found in Walker’s abandoned vehicle, NBC News reported.

Eight police officers were involved in the shooting. Per normal protocol, they were placed on paid administrative leave.

The Ohio Attorney General’s Bureau of Criminal Investigation will lead the probe of police use of force, authorities said, according to NBC.

Akron City Hall and the Police Department vowed, in a joint statement on Wednesday, to release body-camera footage and said “that there can be no trust without transparency.”

“We know that no police officer ever wants to discharge their service weapon in the line of duty,” according to the joint statement. “And anytime they must, it’s a dark day for our city, for the families of those involved, as well as for the officers. Tragically, we are once again faced with a young man, with his life before him, gone too soon. Every single life is precious, and the loss of any life is absolutely devastating to our entire community.”