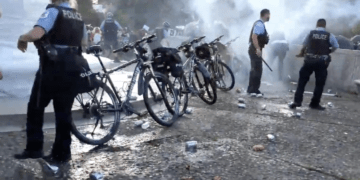 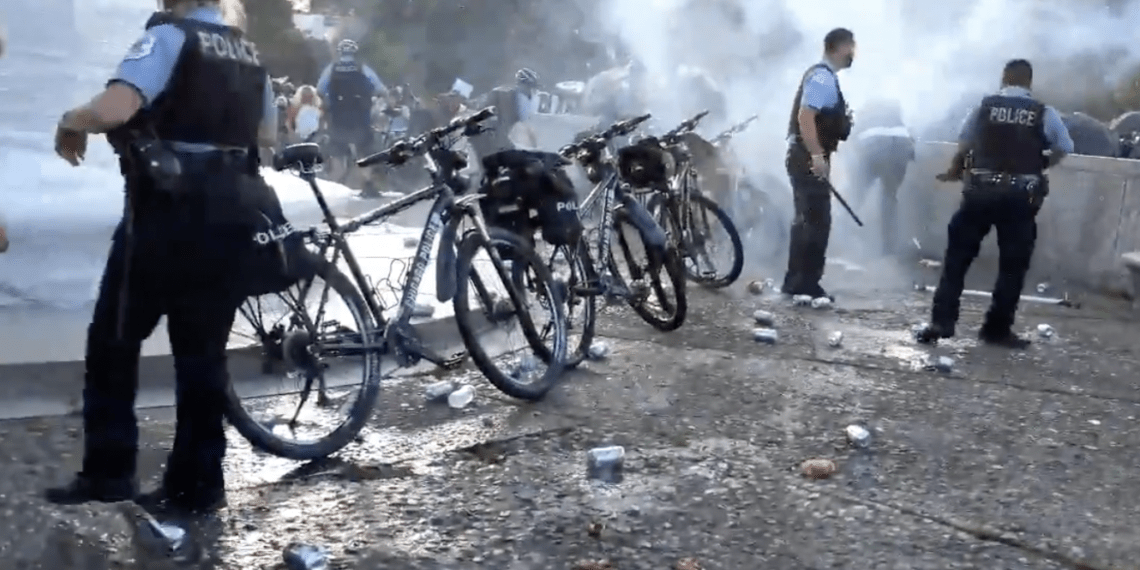 CHICAGO — Eighteen (18) Chicago Police officers were injured in a violent protest Friday, the department said in a statement.

A large group gathered for a protest around 4:20 p.m. local time, the department said. Officers were there “providing security and protecting their First Amendment right to peaceful assembly,” the statement said.

However, as the protests approached a statue of Christopher Columbus, which the city had covered in plastic, some people in the crowd used rocks, fireworks, frozen bottles and other objects to attack officers, the statement said, according to CNN. Suspects then tied rope to the statue in an effort to pull it down.

Chicago Police attacked with bottles and fireworks by people who are at a Christopher Columbus statue. pic.twitter.com/9rwZEOmcK4

When the crowd tried to topple the statue, the police interceded.

The attack resulted in 18 officers injured, the statement said. Some were taken to area hospitals by paramedics for further treatment and some were treated at the scene.

The Chicago Fire Department says that at least four members of the crowd were also injured and taken to a hospital in good condition.

About 12 people were arrested and could potentially face charges that may include battery to a police officer, mob action, and/or other felonies, according to the statement, reported CNN.

Some city officials and activist blamed CPD for the violence, according to ABC 7 Chicago. A few members of the Chicago City Council commented on the protest on Twitter.

Ald. Carlos Ramirez-Rosa said, “Black and Indigenous Chicagoans and people from all across the city came together to do what our so-called progressive mayor refused and failed to do.”

Black and Indigenous Chicagoans and people from all across the city came together to do what our so-called progressive mayor refused and failed to do. They were met with violence and abuse. It's shameful and disgusting.

Ald. Daniel La Spata said, “Chicago may be the only ‘liberal’ city willing to brutalize Black and brown youth to protect a symbol of white supremacy.”

Appalled at the aftermath of today’s Columbus protest. Chicago may be the only “liberal” city willing to brutalize Black and brown youth to protect a symbol of white supremacy. Sickening.

At 9 a.m., several aldermen and Illinois officials gathered to condemn CPD’s response to the protest.

The Italian American Human Relations Foundation of Chicago also responded to the protest, saying in part “This was the work of evil minded people. They have been fueled by an educational system too lax in its reliance on a poor curriculum re the education of the legacy of Columbus, and abetted by the majority of the media who refuse to question the baseless revisionist history of the Columbus saga.”

The Chicago violence occurred two days after three NYPD officers and a top chief were injured during a clash with rioters on the Brooklyn Bridge.

A 24-year-old female was arrested for striking the officers with a cane as they tried to arrest a protester, Law Officer reported. She flipped the bird to the media when she was arrested on Thursday, but was rather gleeful when posting $7,500 bail on Friday.

This is not peaceful protest, this will not be tolerated. pic.twitter.com/cYuDX8G7ku

“Three officers violently attacked by protesters crossing the Brooklyn Bridge,” the department said on its verified Twitter page. “The officers sustained serious injuries. This is not peaceful protest, this will not be tolerated.”