House Speaker Nancy Pelosi's husband, Paul, was arrested on suspicion of DUI in May 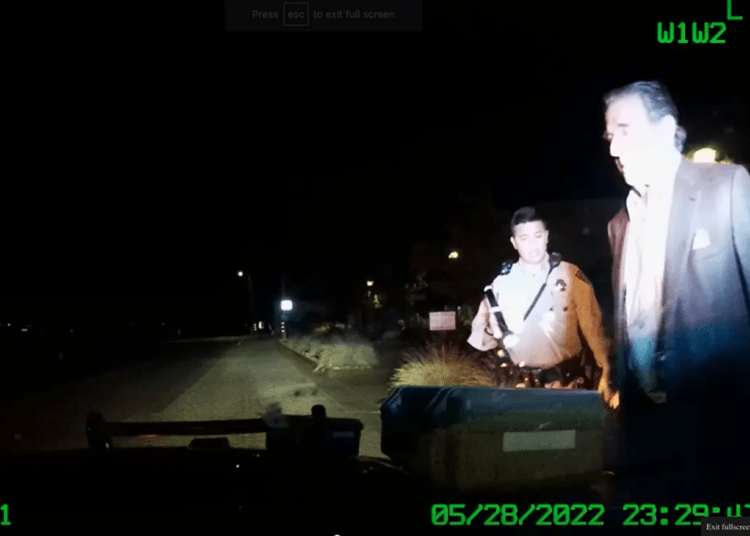 Paul Pelosi pleaded guilty to DUI after crashing his Porsche in May. (California Highway Patrol)

NAPA COUNTY, Calif. – Paul Pelosi was involved in a two-vehicle collision in California before getting arrested for impaired driving in May. The husband of House Speaker Nancy Pelosi pleaded guilty to DUI on Tuesday. He received a sentence that includes three years of probation, restitution to the victim and a three-month DUI program. He must also have a certified ignition device installed on his vehicle for a year.

Following Pelosi’s guilty plea, the California Highway Patrol (CHP) released photos and videos recorded on the night of his May 28 crash. The long-awaited videos show his comportment and what police previously described as “objective” signs of intoxication, as well as police asking him to perform field sobriety tests, Fox News reported.

Pelosi, 82, was driving his 2021 Porsche during the crash involving the other driver’s 2014 Jeep. The vehicles sustained “major” damage during the 10:17 p.m. collision that occurred near the intersection of California Route 29 and Oakville Cross Road.

Pelosi told the officers he started drinking around 7 p.m. and finished around 8. His voice can be heard saying he had a “glass of champagne before dinner” and also “a glass of white.”

Pelosi exhibited “signs of impairment” during field sobriety tests, and officers “observed objective signs and symptoms of alcohol intoxication,” according to the documents. He had red, watery eyes and appeared “unsteady on his feet.”

“He’s constantly grabbing onto the patrol car just to keep his balance,” one officer can be heard telling another as they discuss the situation. At the same time, Pelosi can be seen walking in front of the dashcam with his hand on the front push bar.

After stops at Queen of the Valley Hospital for treatment of any potential injuries, the local CHP office and finally the county jail, officers determined he had a blood-alcohol content of .082%.

More than two hours had elapsed between the crash and the BAC testing, according to the report.

The other driver told police he was headed northbound when he “saw a glimmer of light go across” just before the crash.

Both Pelosi and the other driver referred to as John Doe declined medical treatment at the scene, although officers still took Pelosi to the hospital to get checked out.

The day after the crash, Doe complained of pain in his upper right arm, right shoulder and neck, Fox News reported.

He also complained of headaches and said it was difficult to lift things with his right arm, according to the documents.

Photos also show bruising on Pelosi’s left hand and forearm after the crash and damage to both vehicles.

Bruising on Paul Pelosi’s hand after his May DUI crash. (California Highway Patrol)

The longtime businessman-venture capitalist has been married to the House Speaker since 1963.

Nancy Pelosi was delivering a commencement address at Brown University in Rhode Island when the crash occurred.

“The speaker will not be commenting on this private matter which occurred while she was on the East Coast,” said her spokesperson, Drew Hammill.