Lt. William Kelly was terminated for donating $25 to the Kyle Rittenhouse defense fund 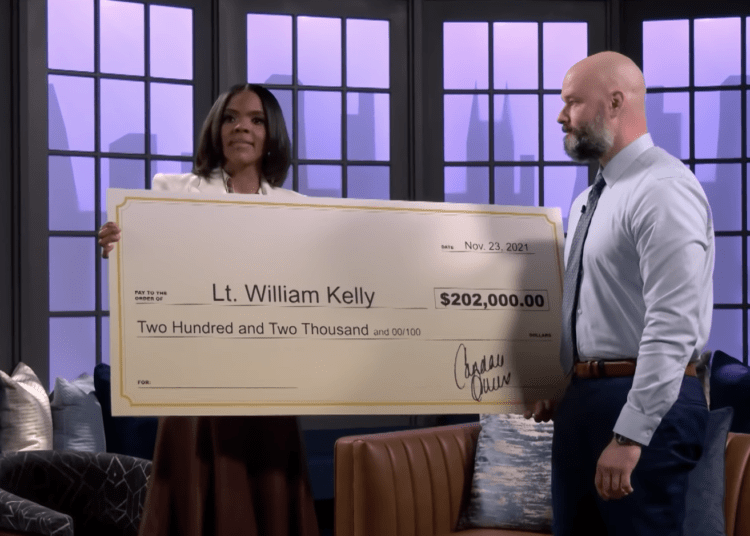 Law enforcement supporter Candace Owens raised more than $245,000 for Lt. William Kelly who was wrongfully terminated from the Norfolk Police Department after he anonymously donated $25 to the Kyle Rittenhouse defense fund earlier this year.

Kelly is fighting for reinstatement, particularly since Rittenhouse was acquitted last week. He filed a grievance over what he described as the “hypocrisy” of his police chief who attended a BLM protest in uniform earlier this year, Law Officer reported.

Meanwhile, Owens presented a check for $202,000 to Kelly as he made an appearance on her show, “Candace” on Monday.

Kelly’s family of five has been surviving on their savings and his wife’s salary as a school teacher. Owens told the studio audience that the figure on the giant check doesn’t account for all the money that has come in, she simply needed to have it printed for the show. In reality, more than $245,000 has been donated to the fundraiser that she launched for the police lieutenant who was the victimized by his woke police chief.

Owens said her goal was $100,000, but that was quickly surpassed by generous supporters in a matter of hours, Daily Wire reported.

“I don’t care how you spend it … but I do hope you sue the city,” Owens joked.

Kelly was fired in April after The Guardian leaked names of police officers and public officials who donated to the defense fund for Rittenhouse. Kelly reportedly donated $25, using his department-issued email address when making the donation anonymously.

Along with his donation, he wrote, “God Bless. Thank you for your courage. Keep your head up. You’ve done nothing wrong. Every rank-and-file police officer supports you.”

The persecuted former lieutenant explained why he thought Rittenhouse was innocent from the beginning during an interview with Daily Mail.

As Owens closed the segment with Kelly, she asked about general police morale when movements like BLM have become increasingly prominent, while demanding “social justice” at times when it’s inconsistent with blind justice, Daily Wire reported.

“Police officers like the rule of law; the law is black and white; we apply the law equally in every situation, regardless who’s involved,” Kelly said. “And when we’re told to stand down, it’s confusing and it brings morale down.”

Kelly is hoping for reinstatement with backpay. He was just ten months shy of vesting for a pension when he was terminated, Law Officer reported.