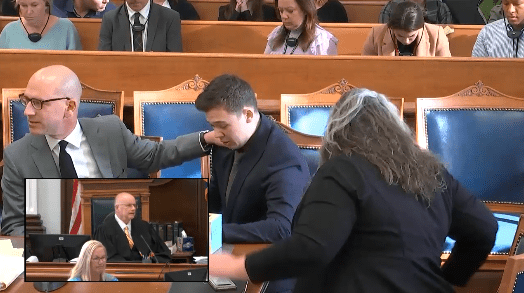 KENOSHA, Wis. — After four days of deliberations, the jury in the Kyle Rittenhouse double murder trial have reached a verdict.

They found him NOT GUILTY on ALL COUNTS.

After the announcement, the judge dismissed the jurors.

Jonathan Turley who is a professor at George Washington University Law School said this was the correct verdict based upon reasonable doubt that was present. He said the prosecutor overcharged the case from the beginning.

“The prosecution’s case fell apart from the outset. … They made blunders throughout,” Turley said.

The law professor also said “it was outrageous that Joe Biden said this was a white supremacist” when there was no evidence to support the preposterous claim.

Civil rights attorney and news commentator, Leo Terrell, said the verdict is a confirmation the legal system works. He thinks it’s important to get facts to BLM protesters. However, that will be a challenge since they haven’t been willing to acknowledge the truth up to this point.

Due to security concerns, Rittenhouse was whisked from the courthouse by family members and friends to get him away from people who might be violently opposed to the verdict, according to David Hancock, a family spokesman.

The crowd outside the court appeared peaceful following the verdict, and many people began to disperse over the next hour. However, as one reporter said, “We’ll see what happens when the sun goes down,” since that is when violence typically begins.