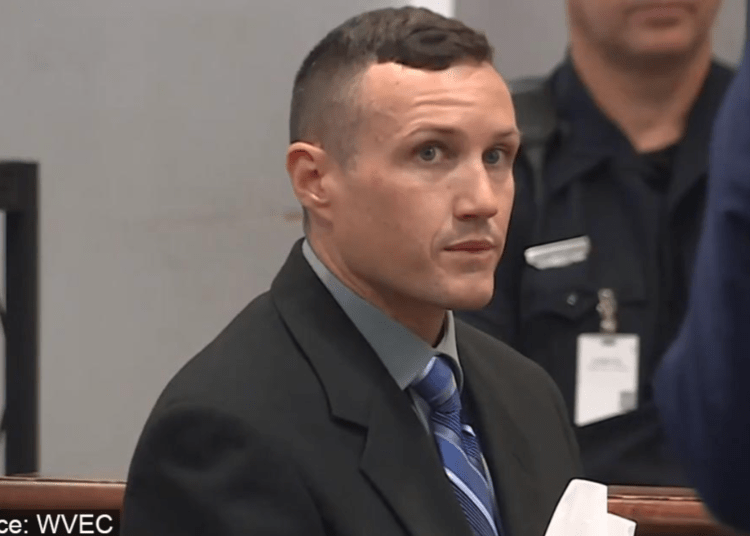 CHESAPEAKE, Va. – An off-duty Norfolk police officer who was charged in the death of an armed man, who had threatened the officer’s wife and young daughters, was acquitted of voluntary manslaughter last week.

During a retrial, the Chesapeake jury determined that Officer Edmund “Ryan” Hoyt of the Norfolk Police Department was not guilty. They reached the verdict Thursday in less than two hours of deliberations, The Virginian-Pilot reported.

Hoyt, 36, a military veteran, had been charged with voluntary manslaughter in the 2020 shooting death of 42-year-old Kelvin White.

The incident took place in the afternoon of Jan. 19, 2020. His wife, Jessica Hoyt, told investigators that White had stepped in front of her and her children as she was pushing a stroller down the sidewalk and that he refused to move, 13 News Now reported.

Jessica Hoyt testified that when she asked White to step aside, he took another step towards her and the kids. It was at that point that she warned him she was carrying a container of mace and that she wasn’t afraid to use it.

White replied by saying he had a knife and threatened to stab her in the face, 13 News reported.

Hoyt told jurors he drove toward the Chesapeake grocery store and confronted White after his wife called and said a man was threatening her and their two young daughters. The officer was off-duty at home when his wife called.

Although the Chesapeake Office of the Commonwealth’s Attorney argued Hoyt’s actions escalated the situation, the defense said Hoyt acted in self-defense when he fatally shot White near the store, according to Yahoo News.

Mario Lorello represented Hoyt. He said the shooting was “always a clear case of self-defense and defense of a family.”

“The jury saw the case and the evidence for what it was: a husband and a father rushing out to his terrified wife just around the corner after a man approached her and her children and threatened to stab her in the face,” Lorello said.

Hoyt testified in his own defense. He said he opened fire after White tried to stab him. At the time of the fatal encounter, White, who stood at 6-foot1 and 285 pounds, was wearing a backpack full of thick books tied together on his chest. A detective described it as a type of homemade body armor.

Prosecutors put Hoyt on trial twice. The first attempt was declared a mistrial in August after roughly nine hours of deliberations resulted in “an impasse,” reported The Virginian-Pilot.

During his testimony at both trials, Hoyt said his wife called him in fear. He thought he heard her say that a man had stabbed her in the face as she walked to the store with the couple’s two daughters. As a result, he got into his truck and hurried to the location, finding his family and White in an area not far from the business.

Hoyt identified himself as an off-duty officer and drew his weapon. When White refused to get on the ground, Hoyt — 5-foot-7 and 150 pounds — said he re-holstered his gun and tried to get the much larger man on the ground.

However, White scratched Hoyt’s face and pulled a knife, which is when Hoyt drew his gun for a second time and fired several rounds.

White was transported to a local hospital where he was later pronounced dead, according to Yahoo News.

When investigators checked his backpack, they found five of the shots hit the books but only penetrated the first two in the stack.

“The jury’s unanimous verdict recognized that Mr. Hoyt had a right to defend both his family and himself in the face of this very real danger,” Lorello said.