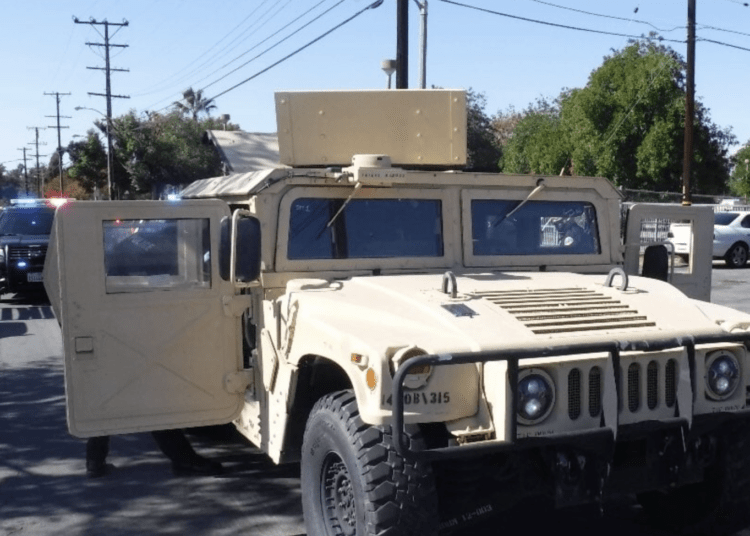 A military Humvee worth more than $200,000 that a Pomona man is charged with stealing from Upland on Nov. 9, 2020. (Pomona Police Department.)

POMONA, Calif. — A California man was charged Friday after he reportedly stole an armored combat vehicle from a U.S. Army center in Upland and led police on a brief pursuit through residential streets, federal officials said.

Armando Garcia, 29, went into the Army Reserve Center in Upland on Nov. 9 and drove away in a Humvee worth more than $200,000, according to the U.S. Attorney’s Office.

Pomona officers later spotted the military vehicle, launching a vehicle pursuit that involved the suspect racing through red lights and driving on the wrong side of the road before he was ultimately taken into custody on East Kingsley Avenue, KTLA reported.

The previously convicted thief was already on parole for a theft and burglary conviction from last year, according to the U.S. Attorney’s Office.

On Friday, he was charged with theft of United States government property and faces a statutory maximum sentence of 10 years in federal prison if convicted of the charge, KTLA reported.

After he was arrested, officers found a large pair of bolt cutters inside the Humvee and discovered that the padlock used to secure the steering wheel’s steel wire appeared to have been cut, officials said.

Garcia is expected to be turned over to the federal authorities later this month.

The defendant is about to discover the significant difference between lax California penalties for auto theft compared to the federal government, according to a police source speaking to Law Officer.

“In recent years, the crime of auto theft has essentially amounted to petty theft,” according to the investigator who works on a task force in Southern California. The exception would be if they can prove the elements of GTA-Grand Theft Auto, which requires “permanent deprivation.” Simple auto theft does not require this element. Nevertheless, “it’s still California, so no one is going to prison for property crime absent extenuating circumstances,” he said.  “As a result, auto theft scams — particularly luxury and sports cars — have become quite lucrative.”