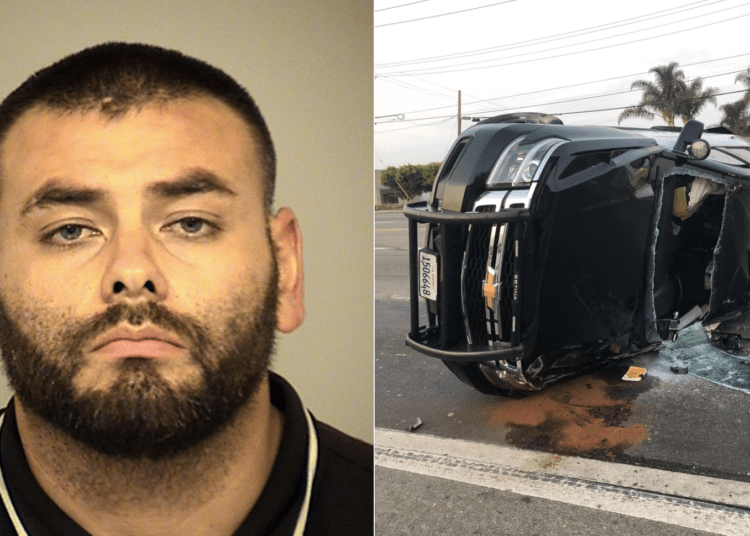 VENTURA COUNTY, Calif. — A man is being accused of attempted murder after ramming a Ventura County Sheriff’s Office patrol unit, not once, but twice while it was being driven by a sergeant in Saticoy early Tuesday, authorities said.

The incident occurred about 2:15 a.m., while the sergeant was driving along the Santa Clara River Bridge, according to a Sheriff’s Office press release.

The suspect, identified as Frankie Avalos, 28, reportedly sped up from behind the sergeant and rammed into the back of the marked patrol vehicle, KTLA reported.

The sergeant sped up and changed lanes, “thinking the driver of the white sport utility vehicle had fallen asleep at the wheel or was driving under the influence,” officials said.

But Avalos sped up again and allegedly “rammed the patrol vehicle a second time, causing it to spin out of control and flip onto its side.”

The suspect then continued driving across the bridge, leaving the patrol sergeant pinned in his vehicle.

In a tweet showing photos of the badly damaged patrol unit on its side, the sheriff’s department called the vehicular assault an “unprovoked attack.”

UNPROVOKED ATTACK: A suspect twice used his vehicle to ram into our HQ patrol Sgt's cruiser early this morning in Saticoy, causing the Sgt's unit to overturn. Sgt. has minor injuries, and suspect in custody. pic.twitter.com/QU9clLQpc0

The sergeant driving the police unit was described as a 37-year veteran of the department. After his vehicle was overturned, he broadcast his location and gave a detailed description of the suspect.

A rescue crew pulled the sergeant from the wreckage. Once he was freed, he was taken to a local hospital with minor injuries, officials said.

Deputies later spotted Avalos’ vehicle in Santa Paula and tried to stop him. However, the suspect failed to yield and a pursuit ensued.

Avalos eventually stopped his vehicle and fled on foot, but was tackled by deputies, KTLA reported.

He was booked on suspicion of attempted murder, evading, hit-and-run, driving under the influence of drugs and assault with a deadly weapon, officials said.

His bail was automatically doubled to more than $1 million because of other cases he had pending before the court, officials said.