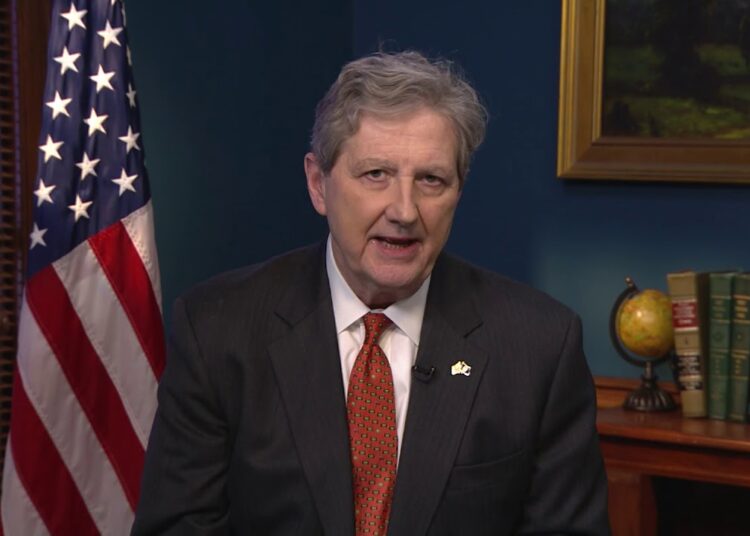 Washington D.C. – On Wednesday, Senator John Kennedy (R-LA) took President Biden’s judicial nominee, Nusrat Jahan Choudhury, for the District Court for the Eastern District of New York to task after she said in a previous statement that police kill unarmed black men every day in America.

The Daily Wire reported on the exchange.

Choudhury tried to excuse her statement by claiming she made it as an advocate, Kennedy retorted, “So when you say something that’s incorrect it’s okay to excuse it by saying, ‘Oh, I was being an advocate?’”

Kennedy started cornering Choudhury by asking, “This is a really simple question, Counselor. Do you believe that cops kill unarmed black men in America every day? You said it at Princeton.”

“Senator, I said it in my role as an advocate,” Choudhury answered, sitting back smugly.

“Senator, I said it in my role as an advocate to make a rhetorical point,” Choudhury patronized.

Pres. Biden’s judicial nominee claimed that police kill unarmed Black men in America every single day. I asked if she really believes that?

“I said it in my role as an advocate.”

“I said it in my role as an advocate to make a rhetorical point.” pic.twitter.com/AgVp5j38Zy

“So when you say something that’s incorrect it’s okay to excuse it by saying, ‘Oh, I was being an advocate?’”Kennedy snapped.  “What do you believe? Do you personally believe that cops kill unarmed black men every single day in America?”

“Senator, I believe law enforcement have an important and challenging job in this country,” Choudhury dodged.

“That’s not what you said though, Counselor,” Kennedy pointed out.

Choudhury postured, “Senator, I say before you here today that I do believe law enforcement have a difficult and challenging job, and I also understand the difference between —”

“I just think that’s an extraordinary statement to make with no data to back it up.” Kennedy interjected. ”None whatsoever. There’s no basis for you saying that, and you knew it then and you know it now.  How could one possibly believe that you’re going to be unbiased on the federal bench?”

“Senator, I believe my record shows that I have worked collaboratively with law enforcement in Boston, Chicago, Mississippi, and Milwaukee to solve complex problems to promote constitutional, effective, and safe policing,” Choudhury answered.

“Your record shows that you believe cops are guilty until proven innocent,” Kennedy charged. “Your record shows that if a cop — if a cop shoots a criminal it’s the cop’s fault, and if a criminal shoots a cop it’s the gun’s fault. I’ve read your record. I’ve read your record … and I don’t appreciate you not answering the question straight up. I would respect you a lot more if you’d just tell us what you believe and not try to hide it.”