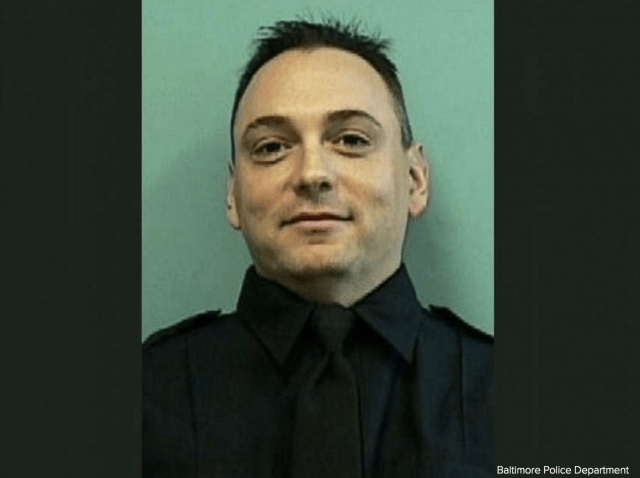 BALTIMORE – Baltimore police announced the arrest of one of their own on Thursday after reviewing officer-worn body cam footage painting a very different picture than what one of their senior officers reported.

Sgt. Ethan Newberg was charged with second-degree assault, misconduct and false imprisonment for allegedly attacking a man who did nothing wrong. The charges came after officials reviewed footage from his body-worn camera of an arrest earlier this week conducted by Newberg, ABC News reported.

According to officials, Newberg, a 24-year veteran with the department, was running a warrant check. During the process he claimed a second man at the scene “challenged him and became combative and aggressive.”

“The body worn camera that I reviewed tells a much different story,” Baltimore Police Commissioner Michael Harrison said at a press conference Thursday. “It shows the man speaking to Sgt. Newberg and walking calmly away after offering his opinion that Sgt. Newberg should have not placed the suspect on a wet sidewalk.”

Moreover, in a video Harrison called “disturbing,” he said Newberg is seen chasing and grabbing the subject while another officer tackled the subject to the ground and placed him in handcuffs.

“From what I saw, he did nothing to provoke Sgt. Newberg, whose actions were not just wrong but deeply disturbing and illegal,” Harrison said. “I don’t know how something like this would have been handled in the past, but I knew that as soon as I saw this video I knew how I would be handling it.”

Newberg was also suspended without pay from the police department.

“This behavior cannot and will not be tolerated,” Harrison said. “His behavior will never have a place in this department as long as I’m the police commissioner.”

Acting Mayor Jack Young, who took over from Catherine Pugh when she resigned due to scandal in May, called the officer’s actions “unacceptable, weak and counterproductive.”

“We will not make progress on the crime right until Baltimore’s communities can have their faith restored in the Department,” he said in a statement. “And as long as there are BPD officers who conducting (sic) themselves the way this officer did, we will never restore that trust.”

Harrison said it was “no secret” the Baltimore Police Department has “a lot to do to repair our relationship with our community members” — a reference to a controversy that has embroiled the department in the past year.

Former police Sgt. Keith Gladstone pleaded guilty earlier this week to planting a gun on a person allegedly run over by Sgt. Walter Jenkins, the leader of the department’s now-defunct Gun Trace Task Force in 2014. The same incident led to the suspension of Gladstone and three other unnamed officers. Jenkins is serving 25 years in prison for a host of crimes committed while leading the gun task force, including robbing citizens, extorting drug dealers and filing false reports, according to the U.S. attorney’s office.

The commissioner said Newberg’s incident was reported to the department’s new integrity bureau, after which an investigation was initiated and the body cam footage was reviewed.