Austin Police Chief Brian Manley has indefinitely suspended an officer because of texts he sent back in March after encountering an Asian homeless man.

Officer Castelline: We’re definitely getting corona. And it’ll be that bastard phuc pham.

Former Officer 1: Lol Yup! He’s the one that actually started it

Former Officer 1: No just being truthful

Former Officer 2: Kind of afraid of catching the corona. A Lot of Slants over here.

About a week later, Castelline sent another text to the group with a meme showing an African-American man who looked like a hospital patient in response to a department announcement that detectives would be pulled to work patrol.

The text messages were discovered during a criminal investigation by APD and the Travis County District Attorney’s Office. 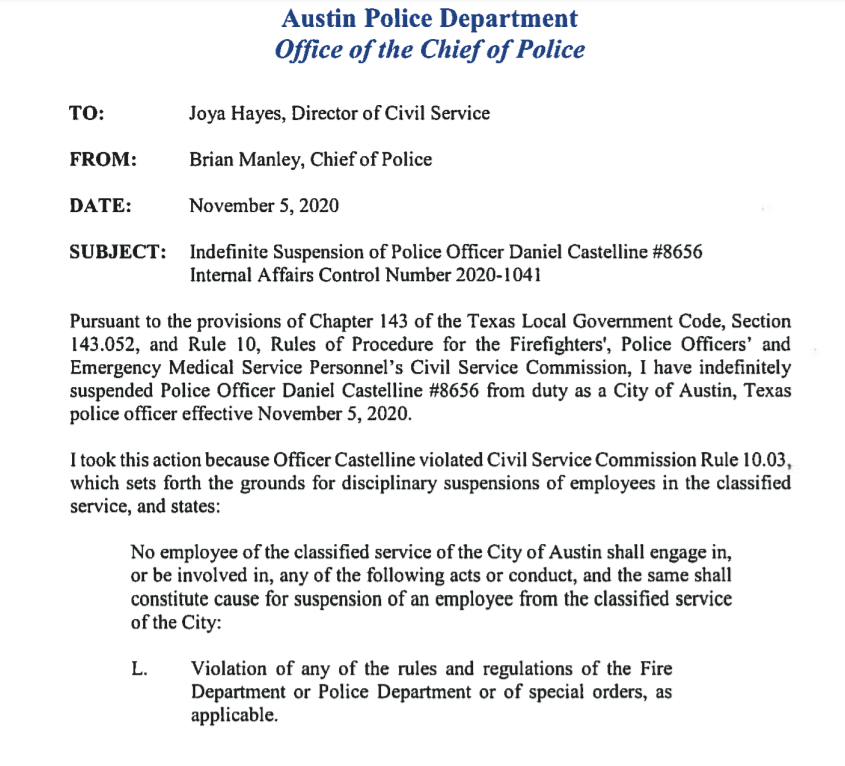 Once found, they were turned over to APD’s Internal Affairs. The department investigated and determined Castelline had violated policy.

In his memo, Manley wrote that Castelline’s inability to own up to what he’d written in the text messages was “troublesome.”

“A strong theme of Officer Castelline’s interview was the acceptance of little responsibility. … Calling Mr. Pham a ‘bastard,’ whether it be to his face or behind his back, is unacceptable behavior and shows a complete disregard for the impartial behavior and courtesy that APD officers are required and expected to show to all persons.”

According to Austin NPR, Castelline allegedly told investigators that Phuoc Pham was a homeless man whom cops frequently interacted with and that if they were to catch COVID-19 it would be likely be from him.

He also told Manley he didn’t think he had violated department policy because he sent the text messages while off-duty.

Law Officer is the only major law enforcement publication and website owned and operated by law enforcement. This unique facet makes Law Officer much more than just a publishing company but is a true advocate for the profession.
Share—and speak up for law & order...
Tags: austin policeCOVIDmessagestext