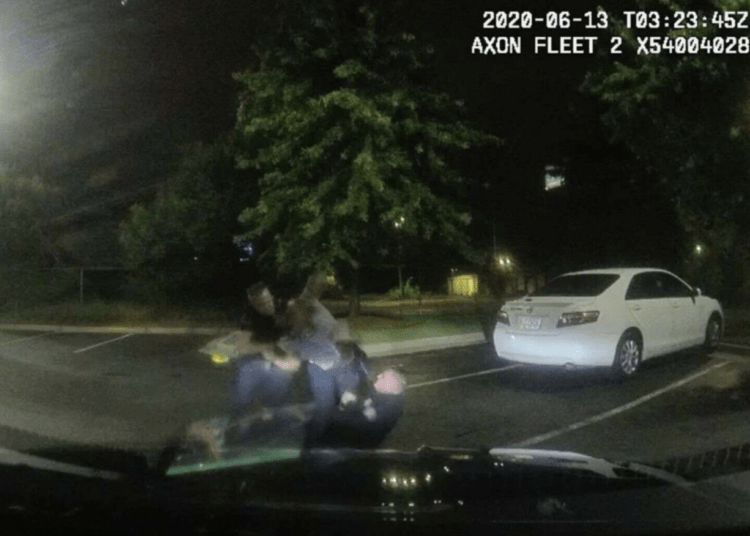 ATLANTA — The Atlanta Police Department has released officer bodycam and dashcam video of the events leading up to the fatal shooting of Rayshard Brooks on Friday night.

The footage shows Officers Garrett Rolfe and Devin Brosnan speaking to Brooks for nearly 30 minutes regarding suspicion of DUI after apparently finding him asleep behind the wheel of his car in the drive-thru line of a Wendy’s restaurant, Fox News reported.

Brosnan is seen on video knocking on Brooks’ car window and appears to have trouble waking him. He asks if Brooks is all right or needs medical attention. Brooks says he’s OK, before appearing to fall asleep again. Brosnan wakes him a second time and tells him to move his car to another spot in the lot, according to the report.

When Rolfe arrives in the parking lot, Brosnan reportedly tells him there was “a pretty good smell of alcoholic beverage coming out of the car.” He says that Brooks’ eyes are watery, he is slurring his words and appears confused as to where he is.

Brooks is seen being questioned by officers, and he tells them he had only one drink, a martini, earlier in the day. He later appears to tell officers that he had a couple, or one and a half drinks, saying he had a daiquiri.

Brooks tells officers he is on Old Dixie Highway in Forest Park, about 10 miles from his actual location on University Ave. in Atlanta.

The officers administer several field sobriety tests, and the bodycam image clearly shows a breathalyzer registers a blood alcohol level of .108. The legal limit is .08.

“I think you’ve had too much to drink to be driving,” Rolfe says before attempting to handcuff Brooks.

However, during cuffing procedures, Brooks breaks free and struggles with the two officers. Fox reports the officers’ bodycams are knocked off in the non-compliant struggle. The officers can be heard warning Brooks: “You’re going to get Tased! Stop fighting!”

Dashcam video shows Brooks wrestling with the two officers. At one point, Brooks grabs hold of Brosnan’s Taser. As Brooks runs from the officers, he turns toward them with the Taser aimed at their direction.

The chase continues for a few moments out of view of the dashcam before shots are fired.

The Georgia Bureau of Investigation (GBI), which is investigating the shooting, said it appears Rolfe fired his service weapon, striking Brooks, during the out-of-view chase. The GBI has also reviewed additional videos including surveillance and social media footage.

“These new videos indicate that during a physical struggle with officers, Brooks obtained one of the officer’s Tasers and began to flee from the scene,” the agency said in a statement. “Officers pursued Brooks on foot and, during the chase, Brooks turned and pointed the Taser at the officer. The officer fired his weapon, striking Brooks.”

It was not immediately clear at what range Brooks was shot or to what parts of the body he suffered gunshot wounds.

The Atlanta Police Department did not immediately respond to Fox News’ request for comment.

Atlanta Mayor Keisha Lance Bottoms called for the immediate firing of the officer who opened fire during a Saturday afternoon news conference.

WSB reports that Bottoms said that she believes it was an unnecessary use of deadly force and she called on the officer’s immediate termination.

“While there may be a debate about whether this was an appropriate use of deadly force, I firmly believe there is a clear distinction between what you can do and what you should do,” Bottoms said. “I have called for the immediate termination of the officer.”

Rolfe was fired following the shooting and Brosnan was placed on administrative duty. The moves follow the resignation Saturday of Atlanta Police Chief Erika Shields as the death of Brooks sparked new protests in Atlanta.

Her resignation comes after demands were made from the NAACP, Law Officer reported.

“For more than two decades, I have served alongside some of the finest women and men in the Atlanta Police Department,” Shields said in a statement. “Out of a deep and abiding love for this City and this department, I offered to step aside as police chief. APD has my full support, and Mayor Bottoms has my support on the future direction of this department. I have faith in the Mayor, and it is time for the city to move forward and build trust between law enforcement and the communities they serve.”

The mayor explains why she accepted Shields’ resignation.

“Chief Erika Shields has been a solid member of APD for two decades and has a deep and abiding love for the people of Atlanta,” Bottoms said. “And because of her desire that Atlanta be a model of what meaningful reform should look like across this country, Chief Shields has offered to immediately step aside as police chief so that the city may move forward with urgency and rebuilding the trust that is desperately needed throughout our communities.”

Protesters on Saturday night set fire to the Wendy’s restaurant where Brooks was fatally shot the night before and blocked traffic on a nearby highway. The fire was out by 11:30 p.m., but video from local news stations showed it again aflame around 4 a.m. Sunday. Atlanta police said 36 people were arrested at protests as of midnight.