Another Seattle CHOP zone shooting leaves one dead, another critical 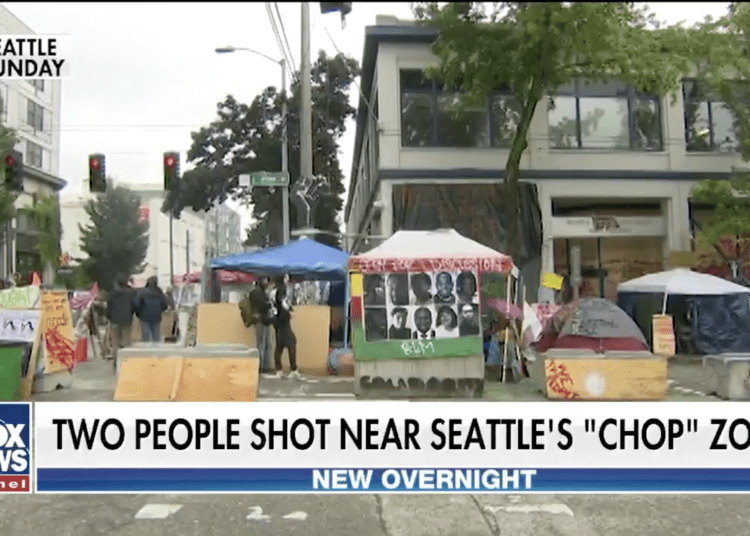 SEATTLE — One man has died and another remains hospitalized in critical condition Monday following another shooting in Seattle’s Capitol Hill Organized Protest, or CHOP zone.

Seattle’s mayor, Jenny Durkan, announced plans to end the CHOP zone a week ago after the first homicide, but the encampment remains in place.

The shooting victim who arrived at the hospital at 3:30 a.m. from the CHOP area on Capitol Hill in Seattle has died, Susan Gregg, a hospital spokeswoman, told Fox News. He was transported to the hospital via Seattle Fire Department medics.

Another male arrived at about 3:15 a.m. by private vehicle. He remains in critical condition in the intensive care unit.

The Seattle Police Department said officers were investigating a shooting near 12 Avenue and Pike Street, where two people were reported injured.

That corner is about two blocks away from Cal Anderson Park, where protesters initially camped out in tents to occupy the area first referred to as the Capitol Hill Autonomous Zone–CHAZ.

The “police-free” encampment has drawn violence as well as a large homeless population since the onset of the occupation three weeks ago.

Now, protesters seek shelter at the abandoned East Precinct, where most of the leadership has already taken up residency, as part of an effort to secure their best bargaining chip in convincing city officials to act on police reform and other demands, the Seattle Times reported.

City efforts to dismantle the CHOP zone were thwarted Friday when protesters laid down in the street to block Seattle Department of Transportation crews and heavy machinery from removing barricades around the occupied area. Crews left after two hours without removing the barricades.

Negotiations between city leadership and organizers over the weekend did not prove fruitful, as hundreds of protesters have reportedly refused to leave the Capitol Hill area.

The first fatal shooting at CHOP occurred on June 20 when a 19-year-old protester was shot around 2:30 a.m. near Cal Anderson Park on 10th Avenue and East Pine Street. Another man was injured in the incident, Law Officer reported.

“Officers attempted to locate a shooting victim but were met by a violent crowd that prevented officers’ safe access to the victims,” Seattle Police Department said in a press release at the time.

The death prompted Mayor Durkan to announce last week the city would begin efforts to dismantle the encampment, asking organizers to convince protesters to disperse to avoid police intervention. For the most part, her pleas have fallen on deaf ears.

Additional shootings have been reported within the CHOP zone.

“To ensure the safety of medical personnel, police staged with Seattle Fire at the edge of the CHOP area and were gathering information about where the shooting victim was located when they learned he had been transported in a private vehicle to Harborview Medical Center,” a police press release said.

He has since been released from the hospital and declined to speak with detectives.