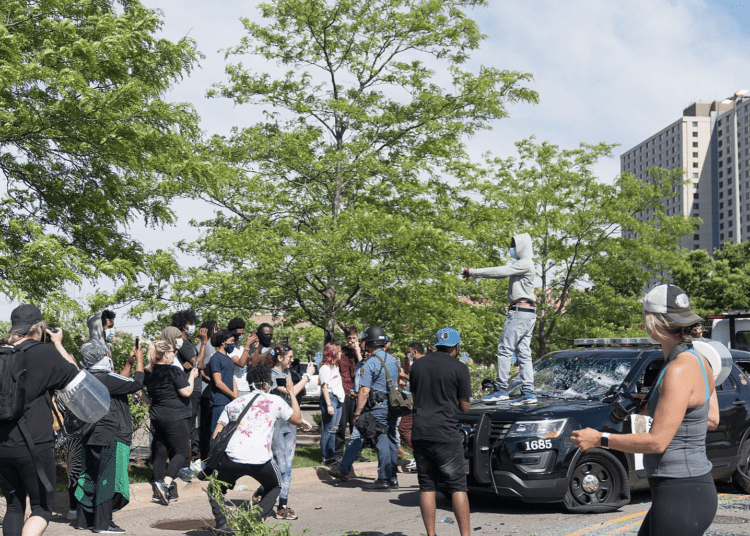 Protests have scattered around the country following the custodial death of George Floyd on May 25 in Minneapolis. Many have been peaceful, some have been hijacked by ANTIFA, and others have turned into riots.

Pew Research Center recently published results of those in attendance at protests.

Some 6% of U.S. adults say they have attended a protest or rally that focused on issues related to race or racial equality in the last month, and those who have are more likely to be nonwhite and younger than Americans overall, according to a recent Pew Research Center survey. They are also more likely to live in an urban area and to identify with or lean toward the Democratic Party. 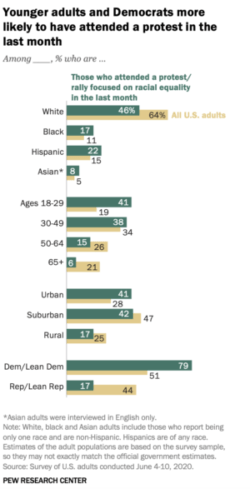 Black Americans account for 17% of those who say they attended a protest focused on race or racial equality in the last month, compared with their 11% share of all adults in the survey. Hispanic Americans account for 22% of recent protest attendees, versus 15% of all adults. The difference is less pronounced but still statistically significant when it comes to the share of protesters who are Asian (8% vs. 5% of the adults surveyed). While 64% of U.S. adults are white, just 46% of those who said they attended a protest focused on race in the last month are white, according to PEW.

About four-in-ten (41%) of those who say they recently attended a protest focused on race are younger than 30; among all U.S. adults, 19% are in this age group. In turn, those ages 50 and older are underrepresented among the protesters, while those ages 30 to 49 represent a similar share of those who have attended a protest as they do of the adult population overall.

City dwellers, who represent 28% of the adults surveyed, make up 41% of those who say they have protested within the past month. Some 42% of people who participated in last month’s protests live in the suburbs (compared with 47% of all adults), and those who live in rural areas account for 17% of recent protesters, compared with 25% of the survey sample.

When it comes to political party affiliation, about eight-in-ten (79%) of those who say they participated in a protest or rally focused on race or racial equality in the last month identify with or lean toward the Democratic Party, while just 17% say they are Republican or Republican-leaning, PEW reported.

As is the case among the overall adult population, men and women each make up about half of those who say they attended a protest focused on race in the last month. Protesters also don’t differ considerably from the adult population in terms of income or educational attainment.

The case against all four former Minneapolis police officers involved in Floyd’s death is headed to court. A Minnesota judge on Friday rejected requests from defense attorneys and media organizations to allow cameras in court during the pretrial hearings, Law Officer reported.

Attorneys for the former officers filed a motion to allow pretrial and trial recordings, arguing it was necessary to guarantee a fair trial in light of comments made by prosecutors and other officials, the filing said.

“The State’s conduct has made a fair and unbiased trial extremely unlikely and the Defendants seek video and audio coverage to let a cleansing light shine on these proceedings,” wrote attorney Thomas Plunkett, representing J. Kueng, one of four fired officers charged in Floyd’s death. “Doing otherwise allows these public officials to geld the Constitution.”