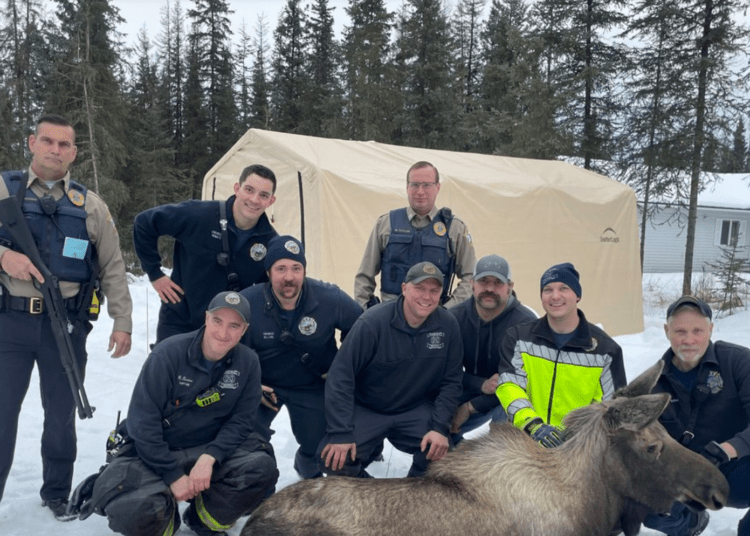 First responders in Alaska pose with a sedated moose they helped rescue after it had had fallen through a window well at a home. (Capt. Josh Thompson/Central Emergency Services)

ANCHORAGE, Alaska — Alaska first responders were faced with an unusual set of circumstances last week—even for them—when a moose became trapped in a residence, requiring Alaska Wildlife Troopers to summon assistance from firefighters to help the wild animal return to nature.

“They were looking for some help getting a moose out of a basement,” said Capt. Josh Thompson with Central Emergency Services on the Kenai Peninsula, reported Alaska’s News Source.

The moose had reportedly misstepped and suffered a fall into the home while grazing Sunday morning, Nov. 20. The bizarre occurrence took place at a residence in Soldotna, which is about 150 miles southwest of Anchorage.

“It looks like the moose had been trying to eat some vegetation by the window well of a basement window and fell into it, and then fell into the basement through the glass,” Thompson said.

Once the 1-year-old bull moose fell into the basement of the home, it became trapped.

Authorities summoned a biologist with the Alaska Department of Fish and Game who tranquilized the wild animal, but it wasn’t completely unconscious.

“He was still looking around and sitting there, he just wasn’t running around,” Thompson said.

However, once sedated, the next problem was lifting the 500 pound moose out of the basement and to the exterior of the home.

To accomplish this task, first responders had to improvise by using a sizable transport tarp that’s typically deployed as a stretcher for larger human patients. Once the moose was loaded onto the tarp, it required six men to carry him through the house and back outside, according to Alaska’s News Source.

Once they got the moose outside, the biologist treated the animal for minor lacerations on its legs from falling through the window. It was then given a reversal agent, the Anchorage Daily News reported.

Until the reversal agent kicked in and the sedative wore off, the moose just “hung out,” before he finally returned to the wild.

“He got up and took off,” Thompson said.

Alaska teen kills 3 siblings before turning gun on himself