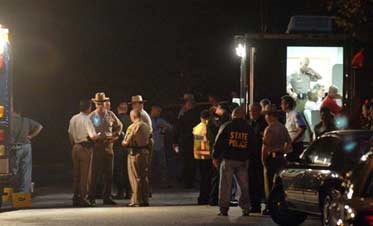 DISTRICT HEIGHTS, Md. — Federal air safety investigators say they hope to wrap up their work in a couple of days at the scene of a deadly weekend helicopter crash that killed four people in suburban Washington.

The crash, one of a growing number of air ambulance accidents that has prompted aviation officials to begin planning a public hearing, happened after the pilot twice radioed for help in foggy weather.

The bodies have been removed from the site, but the wreckage remained Sunday night, National Transportation Safety Board member Debbie Hersman said.

The medical helicopter was carrying victims of a Saturday night traffic accident when it went down around midnight in a suburban Washington park. It was the deadliest medevac helicopter accident in Maryland since the State Police began flying those missions nearly 40 years ago, and the eighth fatal medical helicopter crash in the last 12 months nationwide.

About 30 people have died in such crashes during that period, Hersman said.

Medical aircraft crashes have been increasing since the 1990s, in part because it is a booming business, fueled by the closing of emergency rooms in rural areas and an aging population, according to the National EMS Pilots Association.

However, the state-run program in Maryland does not charge for its services and has been known for its safety record. It has had just three other fatal helicopter crashes in four decades.

"We are the only operation in the country that has the multiple mission of medevac, search and rescue, law enforcement, homeland security," State Police spokesman Greg Shipley said.

The helicopter was on a roughly 25-mile trip from the traffic accident to the hospital when the aircraft radioed late Saturday that it would land at Andrews Air Force Base instead because conditions were "not favorable" at the hospital.

As they approached, the pilot radioed that he was having trouble assessing his surroundings. At 11:55 p.m., he again asked for assistance with the landing and that was the last air traffic controllers heard from him, Hersman said.

The chopper crashed around midnight, three miles from the base, Hersman said.

The NTSB and the Federal Aviation Administration were investigating the cause of the crash.

Rescue workers found the heavily damaged chopper lying on its side, pinned under a large tree that had to be removed with a chain saw.

Hersman said this type of aircraft is not required to carry a voice recorder or data recorder, and this particular helicopter had neither.

She said American Eurocopter, which built the craft, and Turbomeca, which manufactured the engine, are helping with the investigation.

The recent increase in medical helicopter accidents has triggered the safety board to hold a public hearing on the matter, Hersman said, though no date had been set.

A federal investigation in 2006 found there were 55 air ambulance accidents from 2002 to 2005, prompting the safety board to issue four recommendations, including higher standards for medical aircraft and more stringent decision-making in determining whether to fly in bad weather.

Crashes in Texas, Wisconsin and Arizona, where two medical helicopters were in a fiery collision in June, have underscored the dangers of the medical flights. Some have questioned whether it would be safer to transport patients by ground ambulance.

Dr. Bryan Bledsoe, an emergency medicine physician who teaches at the University of Nevada and has researched accident rates of medical helicopters, said Sunday the Maryland medevac system has a good safety record, but medical flights are overused nationwide.

"We've just gotten into a situation here in the United States where we think that the helicopters are a panacea," Bledsoe said. "And they are an important tool, but they are just a tool. We vastly overuse them, patients don't benefit and they are expensive."

There is a tendency to fly in questionable weather, he said. In many cases, the flights aren't justified because the distance to the nearest hospital is not that great or the injuries are not severe enough, he said.

A recent state legislative audit faulted the police agency for failing to document maintenance needs and costs for its fleet of 12 twin-engine helicopters. The helicopter that crashed was bought in 1989, the second-oldest in the fleet, which is paid for, in part, by an annual charge on residents' vehicle registration. It had been inspected Wednesday, State Police Superintendent Terrence Sheridan said.

State Police have grounded all of their flights until the cause of the crash can be determined. Other states and private companies will cover Maryland in the meantime, Sheridan said.

An aunt of Mallard, the medical technician killed in the crash, said she was proud of her niece's work.

"I lost someone I truly, truly love, I'm sorry for everybody else's loss," Cheri Douglas said. "My family is truly, truly hurt."