Are Tasers next to go? 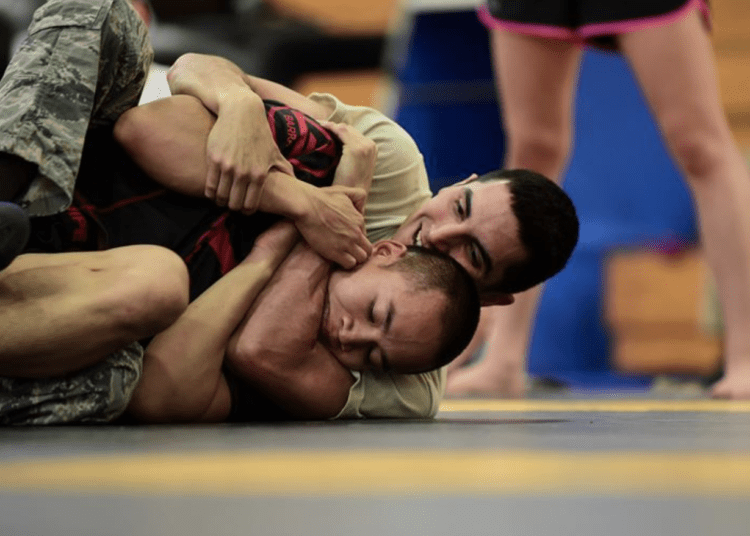 Regardless of the full court press AGAINST the carotid restraint hold, it should not be abandoned by law enforcement.

The carotid restraint might be called something different in your jurisdiction, like the “Lateral Vascular Neck Restraint,” “Bilateral Vascular Restraint” “Carotid Sleeper Hold,” or “Rear Naked Choke” for UFC fighters.

Nevertheless, law enforcement agencies are running from it in synchronic rhythm.

The carotid hold is a vascular neck restraint, which employs bilateral compression of the carotid arteries and jugular veins at the sides of the neck, which results in diminished cerebral cortex circulation. As a result, the rapid reduction of blood significantly affects the ability of the person to remain in an “awake state” and leads to unconsciousness.

The carotid restraint is significantly different than a “bar arm,” or respiratory neck restraint.

A respiratory neck restraint uses direct mechanical compression or pressure over the anterior (front) structures of the neck. This pressure causes asphyxiation by compressing the trachea and restricting the person’s ability to breathe. This type of hold should never be used by law enforcement unless lethal force is justified, explained Dr. Ron Martinelli, a nationally recognized forensic criminologist, and I could not agree more.

Now, before you think I’m crazy for supporting the carotid restraint while law enforcement agencies are shelving it in record numbers, allow me to explain.

When the carotid restraint is properly applied, according to competent training techniques, it has been my experience that arrestees receive far fewer injuries during the arrest process than combative subjects who get tased.

However, it requires ongoing training and application to be used safely and effectively.

Once Tasers were introduced as a force option, officers were injured less frequently as the carotid restraint was essentially discarded as the electronic control device (ECD) became the preferred option.

The carotid restraint was trained at my police academy in Southern California—it was called the “carotid sleeper hold” at the time. As a line officer, I safely used this technique in a training environment as well as taking fighters into custody hundreds of times. I preferred it over the straight baton, PR-24, or asp because I thought it was less injurious to a combative suspect, not to mention the use of a baton typically looks like abuse to the untrained eye, regardless of justification.

The most memorable occasion came while fighting with a combatant who pulled me into a jacuzzi. If I didn’t have this technique at my disposal the fight would have been prolonged. In retrospect, I don’t know what I would have done without the carotid restraint as an option. I would have been forced to render the violent suspect unconscious via another means since he was extremely powerful, and control holds were simply ineffective. Moreover, without the use of the carotid restraint, the suspect could have escaped and I may have drowned.

Ground fighting without it?

Not once during my career did I seriously injure a fighting suspect when using the carotid restraint. I cannot imagine engaging in ground combat without this valuable tool. After all, the ultimate goal is to get a non-compliant suspect into custody with minimal force. I believe that losing this technique when the fight goes to the ground will increase the likelihood of injury to officers as well as suspects.

We have been subjected to non-experts declaring our use of force decisions to be incorrect. Do we really expect them to accurately assess a specific point in a ground fight when suddenly a carotid restraint is lifesaving? Not on your life!

Historically, we’ve trained to win. Now, people who’ve never engaged a desperate, combative subject expect us to tie or get severely injured before being allowed to come back and win. That is unrealistic–if you enjoy your health–and it’s not that simple.

Late in my career, Tasers were introduced as a force option at my department. I was like everyone else. I  embraced the technology and loved adding this option to our “tool belt.” However, I quickly made two observations while working as a watch commander and reviewing every use of force conducted by officers under my command:

Suddenly, as a watch commander, I found myself responding to hospital emergency rooms where arrestees had been transported due to severe injuries sustained during arrest. The civil liability we incurred rose exponentially. Don’t get me wrong, I still believe the Taser is an invaluable tool, but it isn’t risk free, particularly when compared to the carotid restraint.

Moreover, we had two excited delirium deaths that were inappropriately blamed on the Taser. Regardless of civil lawsuits and wrongful death claims, the coroner’s inquest proved the suspects were in the process of an “overdose death” when encountering police.

Without diverting to another topic, I should add that we trained our officer’s to be aware of positional asphyxia. As a result, we always placed an arrestee in the upright position that allowed for maximum air flow.

Returning to the emergency rooms; the common injuries after being tased included broken noses and fractured orbital sockets, which occurred during a fall.

Regardless of policy, suspects get injured when they freefall; something that doesn’t occur when the carotid restraint is properly applied as the officer is trained to cradle the arrestee into a soft landing when handcuffing takes place.

Since officers do not have their hands on combative suspects when they get tased, there is no “soft landing.”

The carotid restraint is not an archaic technique

The carotid restraint has received horrible press by almost everyone outside of law enforcement as well as many use of force experts in the business. I believe this is a disservice to highly trained professionals who know how and when to use this technique. And regardless of the critics who equate it to a lynching, I’ll bet they’d choose it over being tased and then falling face first onto the sidewalk.

I’m not attacking any use of force expert who argues against it, I’m simply one voice testifying that it should not be discarded. There will be a price to pay. However, due to politics, the carotid sleeper hold appears ready to tap out.

When answering the question, “Why use the carotid restraint hold?” Martinelli wrote:

“The Carotid Restraint is a valuable force option which does not rely upon pain compliance, blunt force trauma, or multiple applications of electronic energy (referred to as “load”) from electronic weapons. When applied by a competent end-user, the hold is quick and highly effective and is absent of any evidence of traumatic injury…

“The Carotid Restraint is very effective in controlling EDPs (emotional disturbed person) and subjects experiencing an agitated-chaotic event or presenting with excited delirium because the hold generates a painless unconscious state within 7-10 seconds. The ability to quickly and efficiently render an agitated-chaotic subject unconscious significantly minimizes the risk of in-custody death that often results from prolonged struggles; as well as the physiological exhaustion and cardiac stress created by multiple applications of other force options. The psychophysiological dynamic of “Pain-Panic Escape Response” (P.E.R.) normally associated with ECW drive-stuns and body compression upon the resisting subject is also greatly reduced.”

Several years ago, Pi co-authored a piece, which concluded:

“BVR (Bilateral Vascular Restraint) can effectively and rapidly immobilize a subject and has the unique property of inducing loss of consciousness.

“The application of BVR does not require exceptional strength and takes advantage of the stronger flexor muscles of the arms (compared to the extensor muscles of the arms and neck muscles). Like any other restraint technique, BVR is not risk-free. When distance and timing allow the utilization of other less-lethal forces, such as verbal de-escalation, neuromuscular incapacitation device or chemical agents, law enforcement officials should be encouraged to utilize these means. If officers are in close physical proximity to their subjects without the distance and timing allowed for other less-lethal forces, BVR can be an effective less-lethal restraint option to protect themselves and the subjects. When properly applied, BVR is effective and safe and can minimize injuries to the subjects, bystanders and officers.”

Finally, I recognize “the horse is out of the barn,” so to speak. The emotional avalanche condemning the carotid restraint is so overwhelming, there is nothing I can write that will sway decision makers back to reality. However, I still needed to articulate my thoughts on the topic.

Now that political opponents successfully convinced the law enforcement industry to rollover on the carotid restraint hold, I believe they’ll be coming for our Tasers next. Adversaries are simply waiting for the right circumstances. Will chiefs and sheriffs fight, or rollover on them, too?