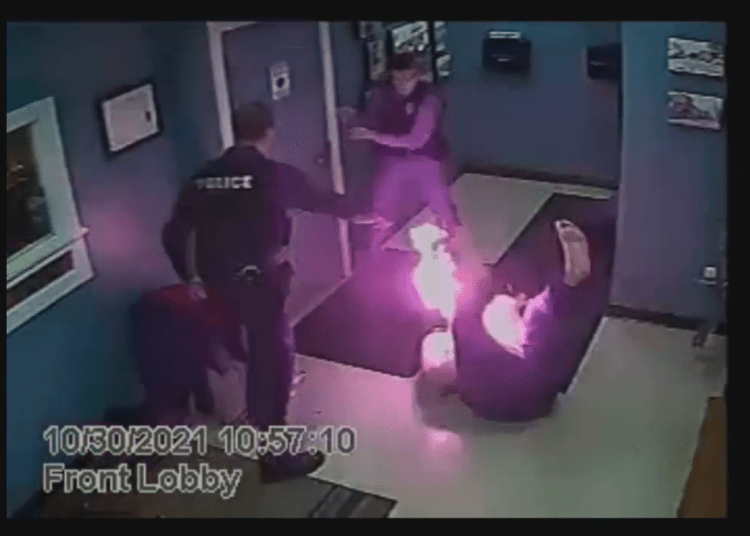 VILLAGE OF CATSKILL, N.Y. — Prosecutors in New York released security footage that shows a man lather himself in hand sanitizer moments before police deployed a Taser on him, and he burst into flames.

Jason Jones, 29, reportedly stormed into the police station on Oct. 30 and began an argument with officers in the lobby, according to authorities, Fox News reported.

During the confrontation, Jones takes a jug of hand sanitizer and showers his head and upper body with it. A short time later, police tased the man and he burst into flames, Law Officer reported last month.

More than six weeks after the incident, Jones died in a hospital, according to New York Attorney General Letitia James.

In previously unreleased videos made public by the New York State Attorney General’s Office Friday, Jones is seen pacing around the lobby while appearing to be aggressive with officers.

At one point, he attempts to open a secure door and seems to be shouting, although the videos do not contain audio.

During the encounter, he empties his pockets, throwing what appears to be a wallet, keys and cellphone down on a table in the lobby, and tears off his shirt. A moment later, he removes his boots too, Fox reported.

About 30 seconds into the second video, a visibly belligerent and allegedly intoxicated Jones grabs a jug of sanitizer off another table in the lobby and begins bathing in it, covering his head and upper torso.

One of three officers in the lobby deploys his Taser. Jones is off-camera at this time, but after a few seconds, a bright light illuminates the area in the bottom of the frame and the officers are obviously stunned by the chain of events.

Jones is then engulfed in flames as he stumbles back into the picture. He falls and the officers back off, initially leaving the room before re-appearing.

After a short period of time the alcohol burns off and Jones has red marks over his upper body.

Another person arrives and medical aid is administered.

Catskill police officers are not equipped with body worn cameras. The station’s security cameras captured the bizarre chain of events.

The Office of Special Investigations within the AG’s office is conducting the inquiry since the state of New York requires a special investigation after any officer-involved death. The investigation is ongoing.

Jones had been in the burn unit at the Upstate Medical University Hospital in Syracuse.

Autopsy results have not yet been released, therefore, it’s unclear what is listed as his official cause of death and how much of a role the Taser episode played in it.