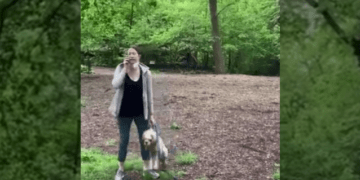 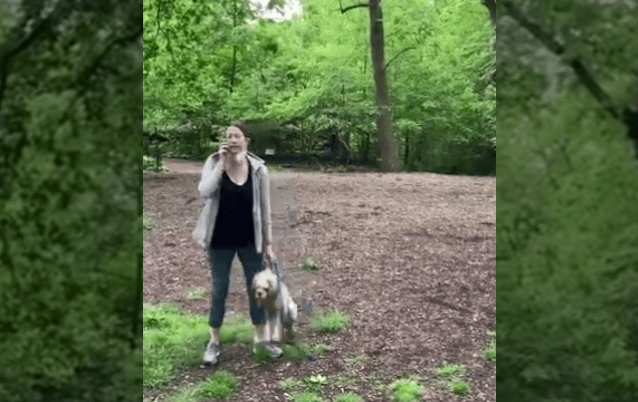 NEW YORK — The white woman walking her dog who called the police during a videotaped dispute with a black man in Central Park was charged Monday with filing a false report.

Manhattan District Attorney Cyrus Vance Jr. said in a statement on Monday that his office had charged Amy Cooper with falsely reporting the confrontation, a misdemeanor. She was ordered to appear in court on Oct. 14, FOX News reported.

His statement read in full: “Today our Office initiated a prosecution of Amy Cooper for Falsely Reporting an Incident in the Third Degree. Our office will provide the public with additional information as the case proceeds. At this time I would like to encourage anyone who has been the target of false reporting to contact our Office. We are strongly committed to holding perpetrators of this conduct accountable.”

Oh, when Karens take a walk with their dogs off leash in the famous Bramble in NY’s Central Park, where it is clearly posted on signs that dogs MUST be leashed at all times, and someone like my brother (an avid birder) politely asks her to put her dog on the leash. pic.twitter.com/3YnzuATsDm

In May, Amy Cooper drew widespread condemnation for calling 911 to report she was being threatened by “an African-American man” when bird watcher Christian Cooper appeared to keep his distance as he recorded her rant on his phone.

After the backlash, Amy Cooper released an apology through a public relations service, saying she “reacted emotionally and made false assumptions about his intentions.”

“He had every right to request that I leash my dog in an area where it was required,” she said in the written statement. “I am well aware of the pain that misassumptions and insensitive statements about race cause and would never have imagined that I would be involved in the type of incident that occurred with Chris.”

This is #ChristianCooper, whom #AmyCooper called the police on ,he’s a Harvard graduate, a former Marvel Comics editor and now the senior biomedical editor at Health Science Communications. This is what he was doing in the park Sunday, watching birds. pic.twitter.com/fFVVXfPXUe

Even with her apology, Amy Cooper was fired from her job at an investment management firm, Law Officer reported.

“Following our internal review of the incident in Central Park yesterday, we have made the decision to terminate the employee involved, effective immediately. We do not tolerate racism of any kind at Franklin Templeton,” the company said in a statement posted to Twitter.

Following our internal review of the incident in Central Park yesterday, we have made the decision to terminate the employee involved, effective immediately. We do not tolerate racism of any kind at Franklin Templeton.

Christian Cooper (no relation to Amy) told “The View” later in May that he accepted the apology, according to FOX.

“I do accept her apology,” Christian Cooper said. “It’s a first step. I think she’s got to do some reflection on what happened because up until the moment when she made that statement and made that phone call, it was just a conflict between a birder and a dog walker, and then she took it to a very dark place. I think she’s got to sort of examine why and how that happened.”

He also condemned death threats against her and said that he was “uncomfortable with defining someone by a couple of seconds of what they’ve done.”