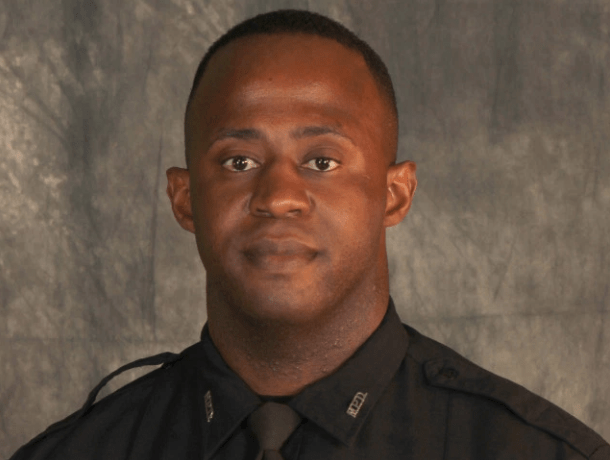 DALLAS – There was victory on Monday for a former Texas police officer who was on trial for his life. A Texas jury has found former Mesquite officer Derick Wiley not guilty in the shooting of Lyndo Jones.

“I am so happy to announce that the jury came back today and unanimously found officer Wylie factually innocent in the shooting of suspect Lyndo Jones,” Dr. Ron Martinelli announced on social media.

Wiley shot Jones in November 2017 when it appeared he was breaking into a truck and a violent fight ensued. Turns out, that truck belonged to Jones, reported CBS DFW.

“This was a very hard-fought battle to show the forensic facts and real truths of the circumstances in the confrontation, fight with and shooting of a violent, drug-influenced suspect by a brave and Valiant officer,” Dr. Martinelli wrote.

“There is only one path to justice and this officer did nothing wrong. It was a mistake for the police chief to fire him and for the DA to keep this going this long,” said Executive Director of Combined Law Enforcement Associations of Texas (CLEAT), Charley Wilkinson last year.

Wiley was on trial for aggravated assault in the shooting of Jones.

Jones, who was high on heroin and marijuana when he was shot, survived. He suffered three gunshot wounds to the back and torso.

He filed a civil lawsuit that cited excessive force, unlawful arrest, detention and interrogation at the hands of Wiley and the City of Mesquite. It also faulted policymakers, the mayor, police chief, city council and the city manager for failing to properly supervise and discipline officers who are known to engage in excessive force.

“Fearing for his life, Jones put his hands up and begged defendant Wiley not to shoot him,” the civil lawsuit says. “Defendant Wiley disregarded and ignored Jones’ pleas and instead discharged his firearm, striking plaintiff three times in the back for no justifiable or lawful reason.”

But an attorney for Wiley, a 10 year veteran of the department, offered a different perspective during a 2018 press conference on what she said happened the night Wiley responded to a call about a man (Jones) acting “erratically” who was “barefoot despite the cold weather.”

“The suspect was reaching around in his vehicle. Wiley tried to call for backup but his radio wasn’t working, and struggle ensued,” she explained. “They ended up on the ground … the suspect was evading arrest in every way and overcame Wiley, and ended up looking over him. He [Jones] then turned and moved in a way that he may have a weapon. Fearing for his life, Wiley shot him, then immediately called 911 for help,” she said.

Wilkinson said Wiley followed the training offered by the Mesquite Police Department to the letter. At the time, he called on the DA to clear Wiley’s name and claims she responded to political pressure.

“[B]ut that kind of meddling by a district attorney, an elected person, the highest law enforcement officer of this county, makes me wonder what in the hell is going on with the district attorney’s office that they’re sitting on evidence, somehow, that would help this officer clear his name,” said Wilkinson in 2018.

Consequently, he faced up to 99 years if convicted.

The first criminal proceeding of Wiley ended in a mistrial in September 2018. At the time, the judge said after eight days of testimony and hours of deliberations, he did not believe a jury could come to a unanimous verdict and declared the mistrial.

Wiley’s attorney told CBS 11 the jury was split 8-4 for acquittal.

Regardless of the prosecutor’s attempt to qualify Wiley’s actions as criminal in nature, the defense said during the first trial the officer should not be punished for doing his job.

“Please send a message to law enforcement. Send a message to this county that law enforcement does matter. And if more officers are backed up when they’re right then maybe when people are wrong, we will prosecute them. Maybe this will tone down some of the shootings that we have in our own county,” said defense attorney Kathy Lowthorp.

“How and why the Dallas County District Attorney’s office and they’re (sic) disgusting, biased investigators chose officer Wylie as the suspect over the real suspect Jones is a study in political prosecution’s,” wrote Dr. Martinelli after the acquittal on Monday. “No law enforcement agency in Dallas County should ever trust the DA’s office for fairness again. It was absolutely the worst, biased investigation that I have seen in my 36 years as a forensic expert, bar none.”

Dr. Martinelli continued the victory celebration: “I am honored and proud to have been selected as the forensic investigator and expert for officer Wylie. I am gratified to know that tonight he sleeps with his wife and kids.”

Moreover, the forensic investigator went on to praise “an amazing team of criminal defense attorneys to work with. Kathy Lathrop, Rafael Sierra and Glynis McGinty. We were supported by the wonderful Commission on Law Enforcement Associations of Texas (CLEAT).”

Furthermore, Dr. Martinelli noted, “I am especially thankful and humbled by hundreds up the supporters of my work and Officer Wylie’s innocence. We felt your prayers and you were the wind beneath our wings. We are victorious over the evil that has beset our country with these false Narrative prosecutions of our brave officers. God bless Officer Wylie and all of you that believed in us.”