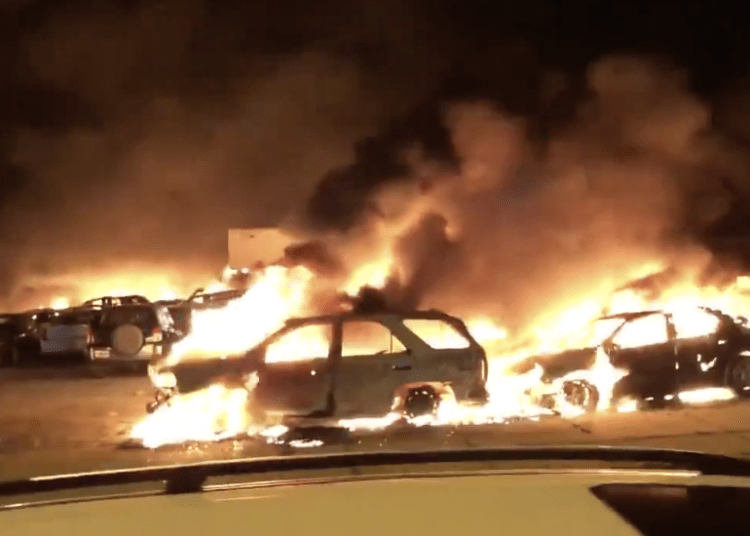 Wisconsin Gov. Tony Evers made irresponsible comments following the officer involved shooting in Kenosha. Riots broke out in the city following the confrontation.

Evers was admittedly uninformed yet he chose to pander to a police-hating constituency, and we’re calling him out.

Evers on Sunday night condemned the shooting of the man, who he identified as Jacob Blake, saying in a statement that “while we do not have all of the details yet, what we know for certain is that he is not the first Black man or person to have been shot or injured or mercilessly killed at the hands of individuals in law enforcement in our state or our country.”

While we do not have all of the details yet, what we know for certain is that he is not the first Black man or person to have been shot or injured or mercilessly killed at the hands of individuals in law enforcement in our state or our country.

A responsible tweet would’ve mentioned something about a non-compliant suspect getting shot by police. Like so many cases, facts alter perspectives once the truth is known. Evers could’ve told citizens that his office would seek details before commenting. In the meantime, he should’ve asked people to remain calm while investigating authorities discover what occurred from A- Z. Lastly, he should have reminded people that due process will occur, but it will be done fairly, impartially, and justly.

But Evers didn’t say any of that. He poured gasoline on a fire and riots broke out. I’ve chronicled the results below.

One officer appeared to be knocked out after getting hit in the head with what witnesses described as a brick, according to a video posted on social media.

Graphic video posted by Twitter user @BotchlaUS on Sunday night shows a pair of officers walking around a police car amid a backdrop of fighting and small fires when the officer is seen suddenly collapsing to the ground, Law Officer reported.

Footage of officer getting knocked out with a brick in Kenosha. pic.twitter.com/zZYypCgyja

Other police officers can be seen trying to help the injured cop as people in the background are heard yelling, “He just got bricked,” and, “F*** the police,” the video shows.

#BREAKING: Large crowd has formed outside the scene of an officer-involved shooting in #Kenosha. @KenoshaPolice say they a man is seriously hurt. People are now breaking the windows of cop cars. Warning – expletives @tmj4 pic.twitter.com/pKqbSKrZQY

By late Sunday, multiple vehicle fires had been set and windows smashed along city thoroughfares as crowds faced off with law enforcement. Officers in riot gear stood in lines and SWAT vehicles remained on the streets to move people away from city buildings despite the declaration of an overnight curfew.

According to reporters at the scene, tear gas was used to disperse groups of people.

Naturally, every riot has its share of vandalism and looting.

BLM rioters not holding back by vandalizing and looting local businesses here in Wisconsin pic.twitter.com/wzfWq9OlUU

An automobile dealership identified at Car Source was targeted by rioters during an overnight crime spree. Ironically, a church next to the dealership displayed a sign in support of Black Lives Matter. Apparently, the rioters didn’t care.

A different video appears to show multiple fires set throughout the car lot as car horns and loud bangs can be heard blaring in the background.

This used car dealership was set on fire overnight by protestors. Car Source is just down the street from the Kenosha courthouse. The owners are devastated. Their business a total loss. @cbschicago pic.twitter.com/emYtWNzvh9

The OIS was extensively shared on social media.

Julian Castro, the former 2020 Democrat presidential hopeful, retweeted a video of the shooting that appeared to show officers yelling at Blake as he tried to walk around an SUV and get into a driver’s side seat. One of the officers appears to hold Blake by his shirt and open fire, Law Officer reported.

WARNING: this video is extremely graphic.

Police in Kenosha, Wisconsin appear to shoot a man seven times in the back at point blank range after he ignores commands. We’re no other non-lethal methods considered, @KenoshaPolice?
pic.twitter.com/dO4VimGCky

I have now reviewed the only video we have about 12X. Here is the forensic analysis so far in seconds.

The governor will reportedly deploy the Wisconsin National Guard Monday night in order to avoid another period of chaos and disorder. However, he should also acknowledge that his uninformed comments were premature and irresponsible, regardless of the outcome of the OIS investigation. But that is unlikely!