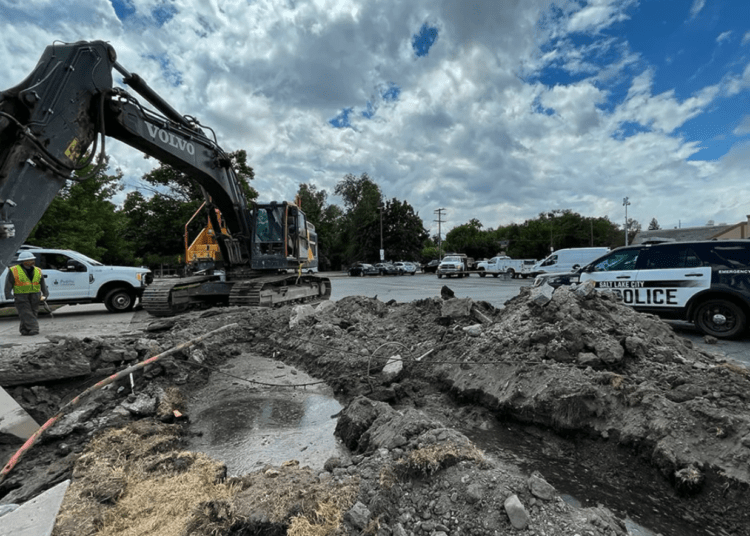 SALT LAKE CITY – A man in Utah was taken into custody Saturday for a rather unique sequence of crimes. Police say he stole an excavator from a construction site and drove it a mile to a Salt Lake City grocery store, where he proceeded to use the heavy piece of machinery to tear up the parking lot.

According to the Salt Lake City Police Department, officers responded to the Smith grocery store at 828 South 900 West about 12 p.m. regarding a man “randomly” digging up a grass strip and sidewalk at the location.

Utility crews responded to the scene to help assess the damage and ensure all utilities were secured.

Investigation revealed the suspect stole the excavator, which had been left running at a job site at 900 South 300 West, according to law enforcement authorities.

Construction crew members working the site trailed the suspect to the grocery store, where he proceeded with his personal demolition project.

A group of witnesses detained the man from leaving until officers arrived on scene, Fox reported.

It was unclear what motivated the suspect to commit the series of crimes.

Here’s something you don’t see everyday, someone stole an excavator and drove it nearly a mile to 800 South 900 West where he started ripping up the ground. The suspect is in custody and utility crews are assessing the damage. #slc #slcpd #saltlakecity pic.twitter.com/VSfnR44xOp

The individual was arrested without incident and expected to be booked at the Salt Lake County Metro Jail. He faces charges that include felony theft and felony criminal mischief, authorities said. His name and age were withheld until the booking process was complete.