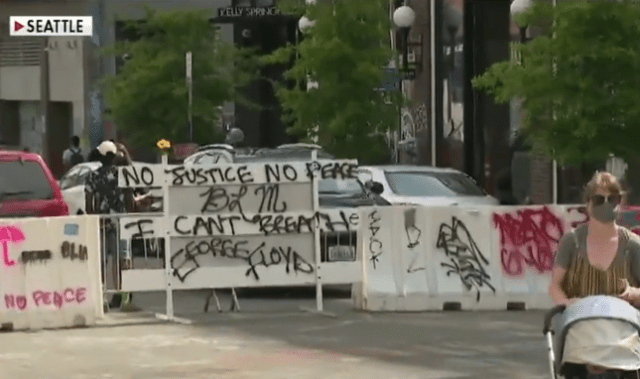 SEATTLE — Radical activists have taken control of a six-block area of Seattle, and done so completely unopposed as police have been ordered out by the mayor, allowing an illegal occupation to occur.

President Trump tweeted late Wednesday that “domestic terrorists” have taken over an area in Seattle amid George Floyd protests and blamed the city’s “radical left Democrats” for contributing to the unrest.

“Radical Left Governor @JayInslee and the Mayor of Seattle are being taunted and played at a level that our great Country has never seen before,” Trump tweeted. “Take back your city NOW. If you don’t do it, I will. This is not a game. These ugly Anarchists must be stooped (sic) IMMEDIATELY. MOVE FAST!”

His tweet did not go unanswered. Mayor Jenny Durkan, a Democrat, took a swipe at Trump, and responded, “Make us all safe. Go back to your bunker. #BlackLivesMatter.”

Attorney General William Barr told Fox News that on May 29 the unrest was tense near the White House and “the Secret Service recommended the president go down to the bunker. We can’t have that in our country.”

Make us all safe. Go back to your bunker. #BlackLivesMatter https://t.co/H3TXduhlY4

Gov. Jay Inslee also fired back at Trump on Twitter, posting, “A man who is totally incapable of governing should stay out of Washington state’s business. ‘Stoop’ tweeting.”

So as the mayor and governor take aim at Trump, they apparently have no problem allowing this occupying force to take over their city and halt commerce in the area.

Hundreds of protesters stormed Seattle’s City Hall Tuesday night to demand Durkan’s resignation, just days after seizing the downtown area, which includes a shuttered police precinct, Law Officer reported.  Radical activists occupying the zone are pushing Durkan to step down if she refuses to defund the city’s police department, according to Fox News.

The city just suffered a weekend of unrest, where officers used tear gas and pepper spray to disperse demonstrators. Several city council members naively believe this was an overreaction. Nevertheless, we see the results. The council members were wrong as activists now occupy the downtown area after police were recalled.

The Seattle Times reported Wednesday that the area in the Capitol Hill section of the city has been called CHAZ and it is “free of uniformed police.” The paper reported that the nearby police precinct that was shuttered during the protests had a new sign on Tuesday that read, “THIS SPACE IS NOW PROPERTY OF THE SEATTLE PEOPLE.”

Assistant Chief Deanna Nollette said barriers were removed from the front of the precinct after it became a flashpoint between officers and protesters. Police also have remained scarce in the occupied encampment.

And after over an hour inside City Hall, protesters are headed out and chanting “Defund SPD” as they leave. #seattleprotest pic.twitter.com/jE6eXkm905

Nollette said police want to discuss reopening the precinct and noted officers are responding to 911 calls in the area, the report said. She said protesters have set up their own barricades, which are intimidating to some residents.

“We are dedicated to working with peaceful protesters on a way to move forward,” Nollette said. “There’s a whole citywide effort to try to identify who the leaders are. It’s just a matter of establishing a dialogue so we can take down the plywood and welcome people back into the lobby.”

Sadly, these are not “protesters.” They are hostage takers, and they’ve taken control of many facets of life in Seattle in addition to the real estate they’re occupying.

This is not the first time that Trump has called out state and city leadership in dealing with protests.

Last month, while looting and arson raged in Minneapolis, Trump tweeted, “I can’t stand back & watch this happen to a great American City, Minneapolis,” Trump tweeted. “A total lack of leadership. Either the very weak Radical Left Mayor, Jacob Frey, get his act together and bring the City under control, or I will send in the National Guard & get the job done right.”

The occupation in Seattle is supported by Councilwoman Kshama Sawant. She allowed protesters inside City Hall on Tuesday night– even though the building is usually closed at night– Komo News reported.

After allowing protesters access to the building, Sawant addressed the crowd like a pep rally. She discussed the upcoming council discussions on carotid sleeper holds and chemical weapons, police budget and the “Amazon Tax.”