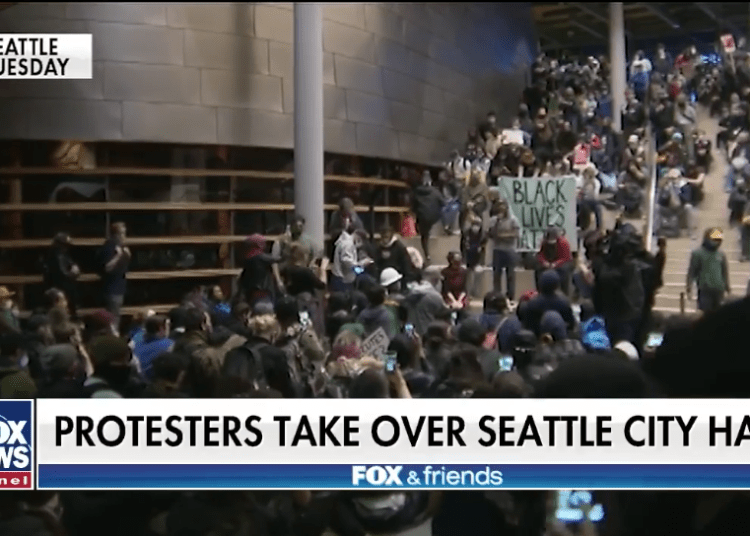 Demonstrators are pushing Mayor Jenny Durkan to step down if she refuses to defund the city’s police department, FOX News reported.

And after over an hour inside City Hall, protesters are headed out and chanting “Defund SPD” as they leave. #seattleprotest pic.twitter.com/jE6eXkm905

The protesters continued to camp out in a self-declared “Capitol Hill Autonomous Zone” (CHAZ)– a region spanning six blocks and encompassing the precinct– which has effectively been abandoned by law enforcement after the Seattle Police Department closed the East Precinct on Monday.

After nearly two weeks of sparring — during which protesters threw glass bottles, rocks, and other items at police, and officers deployed pepper spray and tear gas to break up crowds — the police department made efforts to roll back aggressive tactics in an effort to quell the violence.

Police cleared out two nights ago and said they will be responding to the area only if there is a 911 call for an emergency.

On Friday, Durkan banned the use of tear gas by police, but protesters say it’s far from enough in a climate fraught with tension and distrust for law enforcement.

In response to Tuesday night’s protests, Durkan’s office said in a statement that she remains committed to making “actual steps on policing” and other measures of reform.

“As the person who originally investigated the Seattle Police Department for the unconstitutional use of force, Mayor Durkan believes that SPD can lead the nation on continued reforms and accountability, but knows this week has eroded trust at a time when trust is most crucial,” the statement said.