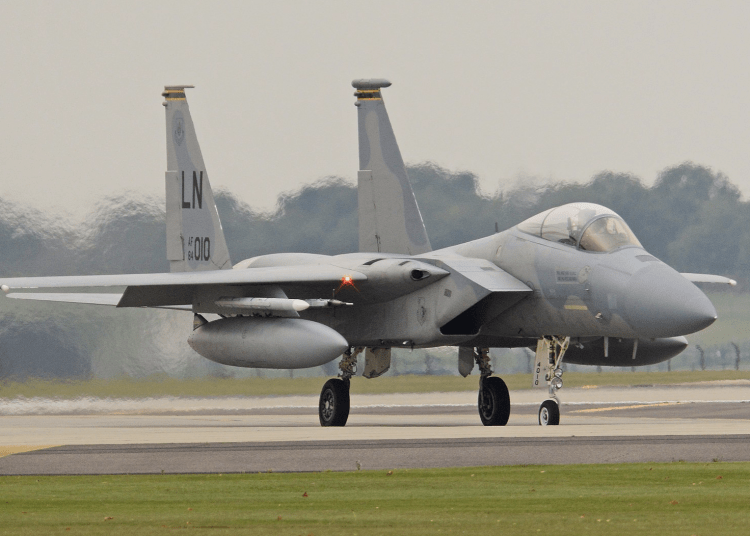 CALIFORNIA — Members of the California National Guard became alarmed last year at the start of the coronavirus pandemic when orders came down through unofficial channels to have an F-15C fighter jet put on alert status — fueled and ready for takeoff — to deploy for a “possible domestic mission” within two hours of orders being given.

The revelation came in a report from the Los Angeles Times, which reviewed internal national guard documents and spoke to numerous sources with knowledge of the matter.

“Those sources said the order didn’t spell out the mission but, given the aircraft’s limitations, they understood it to mean the plane could be deployed to terrify and disperse protesters by flying low over them at window-rattling speeds, with its afterburners streaming columns of flames,” the Times reported. “Fighter jets have been used occasionally in that manner in combat zones in Iraq and Afghanistan, they said.”

Sources that the newspaper spoke with said that deploying military machinery against U.S. citizens would have been highly inappropriate with one source saying that “the decibel level alone from an F-15C demonstrating a show of force can break windows, set off car alarms and cause more fear than shouting ‘fire’ in a crowded theater.”

Maj. Gen. David Baldwin, who leads the California Guard and reports directly to California Democrat Governor Gavin Newsom, did not agree to be interviewed for the report. However, his office denied the request was made. Furthermore, a spokesperson for Newsom claimed that the governor was not aware of the alleged order and claimed that he would not have authorized it, Daily Wire reported.

“But the Times reviewed other internal Guard documents that show the jet was placed on an alert status for a possible election-week mission and that officers discussed concerns in March 2020 as well as that summer about using the F-15C for domestic purposes, including to intimidate civilians,” the Times added. “The sources said the directives from Guard headquarters made their way down orally or in text messages, rather than in formal written orders, which was unusual and heightened their concerns that the jet would be used inappropriately.”

Records viewed by the Times indicated that the jet was prepared for a potential domestic mission under the Defense Support of Civil Authorities order which authorizes using military forces for nonmilitary emergencies, including natural disasters and helping law enforcement respond to widespread violent riots. The jet was reportedly ready to be deployed throughout the pandemic and was also ready to respond to violent left-wing riots that broke out after the death of George Floyd and in an anticipation of any election related violence, according to reports by the news organization.

One source told the Times that the order would have been “completely illegal” and would have “disgraced the military.”

“That’s something that would happen in the Soviet Union,” said a second of the Times’ sources, who spoke on condition of anonymity because they feared retaliation from their superiors. “Our military is used to combat foreign aggressors.”

“It’s a war machine, not something you use for [suppressing] civil unrest,” a third source told the Times, adding that even considering using a fighter jet against U.S. citizens was “definitely unprecedented” in his experience.