The shameless ads popped up in San Francisco and Los Angeles 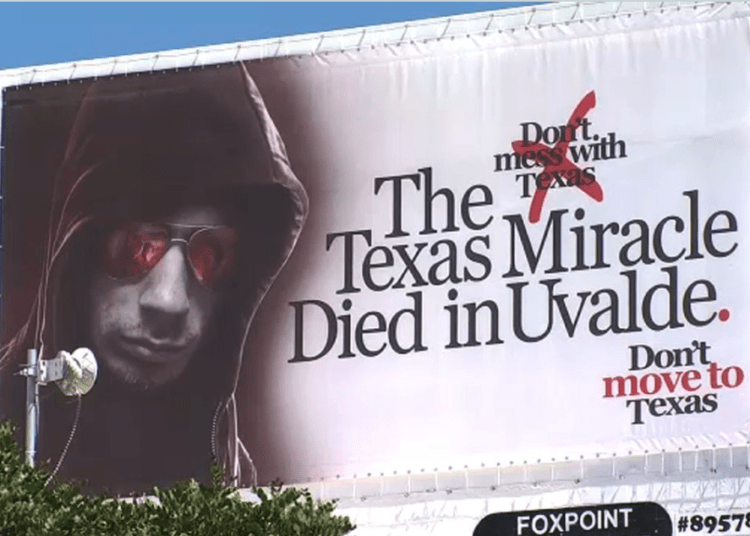 These "disgusting" and "offensive" billboards popped up in San Francisco and Los Angeles. (Twitter)

“The Texas Miracle died in Uvalde. Don’t move to Texas,” the billboards disgustingly say, along with the slogan “Don’t mess with Texas” crossed out, the Western Journal reported.

The ads appear to be a desperate move to slow the ongoing U-Haul trucks moving residents from the Golden State to the Lone Star state.

Texas is a state that wholeheartedly supports the Second Amendment, while California and most of its left-leaning politicians want to disarm its people. So the billboards are clearly taking a shot (pun intended) claiming Texas is unsafe.

But could the miserable move really be about lost revenue with the flow of taxpayers fleeing California?

Apparently desperate enough that someone is putting up billboards warning people they could be the target of a mass shooter if they move to Texas.

It’s unclear who decided that it’s a good marketing technique to stand on the graves of 19 dead children and two slain teachers who were murdered at Robb Elementary School in Uvalde, Texas, on May 24.

That said, at least two billboards with the tasteless message have been erected, one in Los Angeles and one in San Francisco, according to the New York Post.

FoxPoint Media is reported to have leased the San Francisco billboard, located at the corner of Folsom and 7th Street, to advertisers. It didn’t return the Post’s request for comment, however.

As for the “Texas miracle,” it’s a phrase originated by then-Gov. Rick Perry in 2011, as SFGate reported. The slogan refers to the Lone Star State’s ability to not only survive but thrive after the 2008 recession.

“I run into California transplants everywhere,” he said. “The numbers are staggeringly high as Texas welcomes residents and businesses alike with laws and policies that make sense to the common person. One reason I left a state I love is because it’s been monopolized by power thirsty, left-leaning politicians who no longer care about law and order.”

One study shows that 10 percent of the Texas transplants originated from California.

“According to a study by the Texas Real Estate Research Center, one in every 10 Texas transplants is from California. Last spring, California lost a House seat as its population declined relative to other states, while Texas gained two,” the New York Post reported.

Beyond the law and order issues, California has been one of the strictest states when it comes to pandemic policies, while Texas has preserved relative freedom for its residents, according to the Western Journal.

Furthermore, Texas Gov. Greg Abbott and California Gov. Gavin Newsom have taken pot-shots at one another.

“Earlier in the summer, Newsom took out full-page ads in three Texas newspapers blasting Abbott’s stance on abortion and gun control,” the Post noted. “Abbott himself previously campaigned with the slogan ‘Don’t California my Texas!’”

California is also losing residents to other states as well, like Arizona, Idaho, Wyoming, Montana, Tennessee, and North Carolina. Moreover, they have people fleeing to Mexico City, according to the Los Angeles Times.

Mexico City has seen an influx of remote workers and so-called digital nomads, many from California and all taking advantage of lower prices and rent south of the border, the Western Journal reported.

Despite the transitions being made by many people seeking a better quality of life, the politicization of the Uvalde massacre featured on the billboards is shameless.

Whoever was behind these advertisements should be called out for a public scolding.

It’s one thing for governors to trade barbs via the media. It’s another thing for anonymous parties to weaponize grieving parents halfway across the country to make a point.

According to the Post Millennial, responders on Reddit remarked the signs are “the most disgusting use of political propaganda, using the tragedy to their advantage” and “It’s honestly kinda offensive to the people who lost their children in Uvalde.”