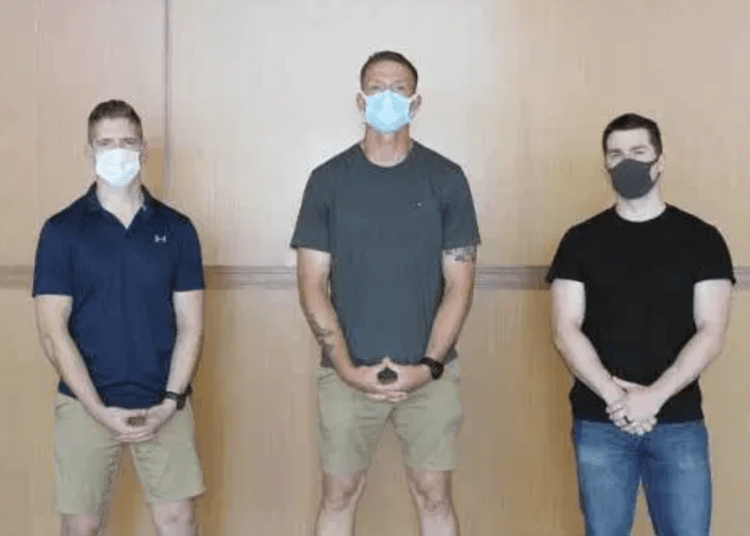 Three U.S. Marines jumped into action and are credited with subduing a hostile passenger Monday aboard a flight from Tokyo to Dallas. (Photo via WNCT)

MARINE CORPS BASE CAMP LEJEUNE, N.C. – Three U.S. Marines jumped into action when needed and are being credited with subduing a hostile passenger Monday aboard a flight from Tokyo to Dallas.

Dietrick was first to notice the disturbance, WNCT-TV reported.

“While watching a movie during my flight from Japan to Texas, I started to hear screaming coming from the restroom on board,” Dietrick, an infantry assault section leader, told the station. “When I took off my headphones, I heard a man sounding very distraught and screaming from the bathroom.”

As a result, Dietrick and the other Marines quickly took up positions outside the restroom as a flight attendant prepared to unlock the door. When it was opened, the Marines grabbed the passenger and applied flex ties to keep him restrained, according to the report.

Three U.S. Marines detained a hostile passenger who caused a disruption by making threatening comments during a flight from Japan to Texas, Monday, May 4. https://t.co/8yXTDzN6AA

Once the disruptive passenger was secured and seated, the Marines maintained watch over him until the flight could land at Los Angeles International Airport, where it had been diverted so the passenger could be taken for a mental evaluation.

“The three Marines were on-board and able to restrain the unruly passenger,” a spokesperson from the Los Angeles Airport Police said. “Great job done by those Marines!”

Meinhardt and Kult later shared their accounts of what occurred with the news organization.

“I knew I had to step in when he became a danger to others and himself,” Meinhardt, a mortarman, said.  “I didn’t think twice about helping restrain him through the rest of the flight.”

“We are well trained and it paid off today,” Kult, an infantry officer, told the station. “We just assessed the situation and acted. Working with the flight crew, we got the door open and from there worked together to subdue him. We didn’t take time to talk it over. We just got ready and did what we needed to help.”

Their battalion commander on base provided some thoughts.

“Honestly, I’m not surprised,” said Lt. Col. Chris Niedziocha, battalion commander, 1st Battalion, 6th Marine Regiment, according to WNCT. “I happen to know all three of them, two of them well, and they are all what I would call ‘men of action.’ I’m continually amazed by and grateful for the people we have in this battalion.”

The Marines had been about half-way through an approximately six-month deployment, as part of the Unit Deployment Program at Camp Schwab, Okinawa, Japan, when for differing reasons each was cleared, via a combatant commander-endorsed exemption-to-policy waiver, for essential travel back to the United States.

An investigation is being conducted by the U.S. Attorney’s Office for the Central District of California as well as the FBI office in Los Angeles, the report said.

Unruly passenger strips down to underwear during flight, forces plane to divert