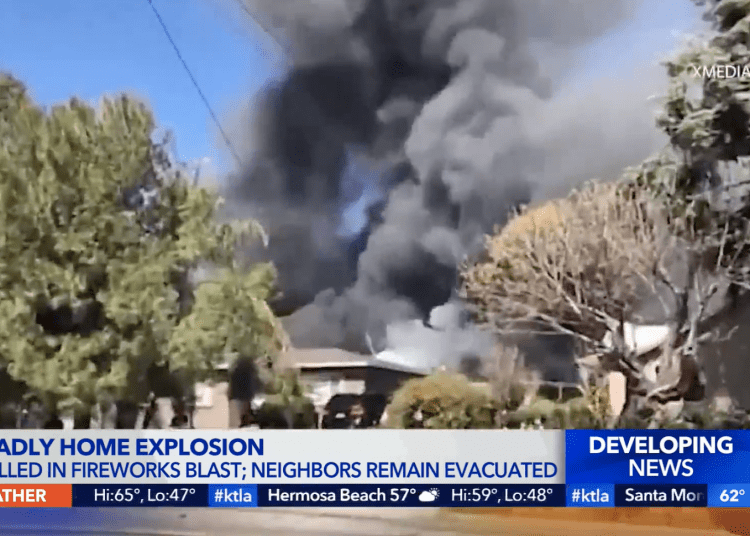 ONTARIO, Calif. — A deadly explosion that rocked an Ontario neighborhood Tuesday and left many under evacuation orders has officials still unable to investigate a day later as crews work to first clear the area of any munitions that may still be live.

“There is still a very significant chance there could be live munitions out there,” Ontario Police Department Chief Mike Lorenz said during a Wednesday morning news conference.

Two people likely killed in the blast have not been officially identified but Lorenz named two men associated with the property that are listed as missing.

The two were identified as Alex Paez, 38, and Ceasar Paez, 20, KTLA reported.

Lorenz said the two men are cousins with the younger Paez being a graduate of Ontario High School.

Three other people were injured in the blast, which occurred just after 12:30 p.m. on the roughly one-acre property near the intersection of West Francis Street and South Fern Avenue.

The explosion was fueled by commercial-grade fireworks that were heard and felt for miles. Fireworks of any kind are illegal in the city of Ontario.

The powerful explosion sent a debris field across about 80 properties, Ontario Fire Chief Ray Gayk said during the news conference.

A firearm that was “probably part of the explosion” has also been located, Gayk said.

An investigation into the cause of the blast is yet to begin since the area remains unsafe. “We can’t get investigators in there,” Gayk said.

The first priority will be to clear the area of any unexploded ordnance but it could take a few days. After that, the investigation will occur. Moreover, once the area is rendered safe, residents will be allowed to return home, Gayk said.

Twenty-four bomb technicians from three counties have been called in to assist in the investigative process, he said.