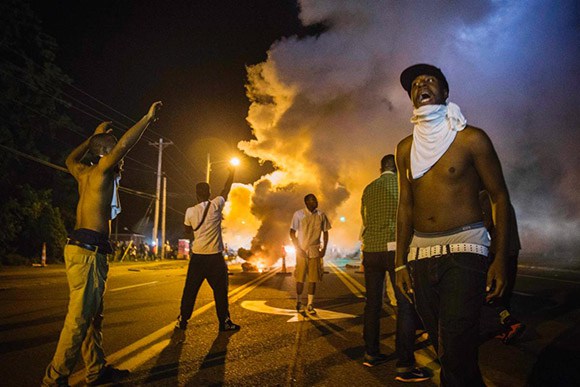 The “Ferguson Effect” spiked violent crime significantly in the 75 largest counties in America with the resulting effect being 2000 black homicide victims in 2015 and 2016, compared with 2014 numbers.

What America is seeing now has come with such speed that it will make the “Ferguson Effect” look like Disneyland.

Heather MacDonald, a contributing editor of “City Journal” and the author of “The War On Cops” calls what we are now seeing an “outpouring of contempt against the pillars of law and order that has no precedent in American history.”

And with that, according to MacDonald, will be “rising carnage” in our inner cities.

“During the two weeks of national anarchy that followed the death of George Floyd, cops were shot, slashed, and assaulted; their vehicles and station houses were firebombed and destroyed. American elites stayed silent. Since then, police have continued to be shot at and attacked; the elites remain silent. Monuments to America’s greatest leaders are being defaced with impunity; anarchists took over a significant swathe of a major American city, including a police precinct, without resistance from the authorities. And a push to defund the police gains traction by the day.”

From the murder of 18 people in Chicago last week, including a one year old boy and ten year old girl, to the New York City homicide rate at a five year high along with a homicide rate in Milwaukee that has not been seen in 25 years, what we are seeing today not only mirrors the “Ferguson Effect” but it is happening at a faster pace with far more violence directed. at particular, those most vulnerable…..African Americans.

Meanwhile, MacDonald calls out those inside the Black Lives Matter Movement that are ignoring these real black victims.

So far this year, 78 percent of all homicide victims in Chicago are black, though blacks are less than a third of the population. But the defund-the-police advocates and the Democratic establishment have said nothing about the growing loss of black lives. Instead, the Black Lives Matter movement is tweeting about police defunding, last weekend’s gay pride marches and NASCAR’s Bubba Wallace, the subject of yet another hate-crime hoax. DeRay Mckesson, an early BLM organizer in Ferguson, is retweeting about whether homophobes are secretly gay.

Activist Shaun King, who recently called for vandals to destroy stained-glass windows portraying the Baby Jesus and Mary, is retweeting that Mount Rushmore is an act of vandalism. Ja’Mal Green, a Black Lives Matter organizer in Chicago who was arrested in 2016 for assaulting and attempting to disarm an officer, offered a $5,000 reward on Saturday for information on the killing of the 1-year-old boy in Chicago, but coupled that offer with another call to defund the police. Since then, Green has been tweeting about abortion rights and the extradition of President Trump to Iran. House Speaker Nancy Pelosi is tweeting about abortion rights, gay pride and Trump’s culpability for the coronavirus epidemic. The Vera Institute for Justice, a liberal criminal-justice think tank, announced on Monday that “now is the time to spend less on policing” in order to “create safer communities for Black people.”

According to MacDonald, the safety of law enforcement is in peril. “Ambushes await officers…” and while violence is upon anyone and everyone in our communities,  “One of Baltimore’s defunding groups, “Organizing Black,” was unmoved. “ABOLISH THE POLICE is the goal,” it wrote on Twitter, “F–K THE POLICE is the Attitude.”

MacDonald closes, saying that “these are no longer the warning signs of a possible breakdown of civilized life. That breakdown is upon us.”

Heather Mac Donald is a contributing editor of City Journal, from which this original column can be located here