It began when a deputy’s daughter was in the hospital on Christmas Eve in 1995. Something about no chimney to hang a stocking on, and to see children nestled into cold, mechanical beds with wires and machinery surrounding them somehow didn’t welcome dances of sugarplums in their dreams. The deputy, lovingly referred to as “Guts,” dressed up like Santa Claus and passed out candy canes to the kids in the hospital. When Christmastime came the following year, Guts shared this with his partner, Deputy Mike Wright. Wright suggested they do it again.

Wright called Kaiser Hospital of Roseville, California and they loved the idea. Wright and Santa Guts dressed their daughters up as elves, and delivered little stockings filled with candy to the children in the pediatric ward at the hospital.

Touched by the response from the previous year, the hospital staff asked if Santa could return (by then it was 1997), and also take some Christmas cheer to the home of Jonathan, a truly special boy with terminal cancer. Jonathan had asked for a Nintendo 64 for Christmas. It just so happened that Wright’s daughter had a Nintendo 64, and she wanted to give it to Jonathan. Santa Mike and his elves delivered the Nintendo, games and a stocking, and the family was thrilled. Jonathan passed away a few months later.

The Sacramento Sheriff’s Santa Claus Project was born. Every year the Kaiser hospital pediatric ward gets a Santa visit with all the trimmings. Gifts, stockings, elves, Mr. and Mrs. Claus, and deputies fill the ward, bringing tired smiles and glistening eyes. 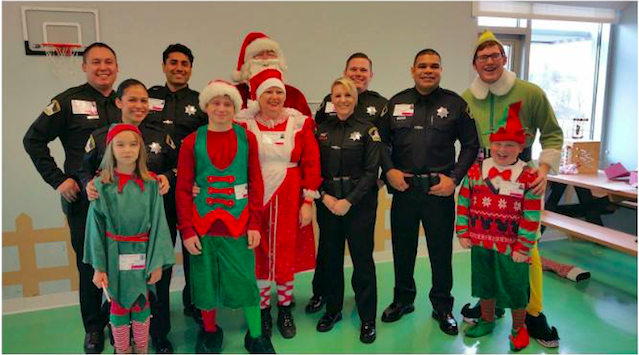 It doesn’t stop there. The hospital staff chooses 3-4 families a year whose children are convalescing at home, and they compile a list of needs and wants for each family. The criteria that decides who receives is that the family is humble—in attitude and means, in addition to having a child who is terminally ill. They go all out for these families. They shower them with things they both need and want, from cleaning products to furniture and appliances and items from their wish lists.

As donations have grown, so has the ability to bless. In the beginning, the little stockings were purchased with the deputies’ own pooled resources. As the project grew, stores like Walmart and Kohl’s began to donate money and candy. Fry’s stepped up and donated a significant gift card, and have done so every year since. This is important, as the kids have muscle and memory issues, so electronic games and pads are helpful for dexterity and thinking skills. Now, the donations come from several stores, organizations, individuals, and deputies.

Santa Mike and his families—blood and blue—donate time, effort, and money to bring Christmas to those who are plagued with difficult circumstances. The effort has expanded to include WEAVE and The Sister’s House (victims of domestic violence), and law enforcement families who are struggling in addition to the terminally ill children.

The Wrights spend the entire month of December working towards the project. All five of their kids help shop, stack, wrap, organize and deliver (in costume) the gifts. Every room in the house is filled with racks of toys. They scour sales and look for deals on items asked for. They constantly stop in at stores as they get requests for families that Probation or Patrol Services find on duty. In these instances, the gifts are delivered by deputies. The Wrights celebrate their own Christmas on Christmas Eve so that Christmas Day is set aside for a steady stream of deputies coming by to pick up gifts for families they come into contact with.

Last year, Mrs. Claus went through her own battle with cancer. She was diagnosed in June 2015, and went through chemotherapy, surgery, and recovery. That didn’t stop her from doing her part in the Santa Claus Project. “I have the most amazing wife in the world,” says Wright. “She bought into this 27 years ago, and continues to work tirelessly from December 1st through the 31st. Last year was tough, but the family kicked through, and so did she.” Her tests continue to come back cancer-free.

Santa Mike has many memories of the children they gave to over the years. There was Steven and Tyler, two brothers that they brought gifts to for three years in a row, and then the fourth year they had passed. He remembers Sabrina, a little Mexican girl about eight years old. When they asked her what she wanted for Christmas, she replied, “silverware and dishes.” The family had very little, and she wanted to make sure that their needs were met. No matter how often the hospital staff asked her what she wanted for Christmas, she always gave answers for the others in her family. “She was the most beautiful little girl I’d ever seen,” says Wright with tears in his eyes. “It took two days of coaxing to give us an idea of what she would receive.” She, too, passed away.

Santa Mike saves all of the letters he’s received over the years from thankful kids and their families. “It’s hard for me to know that they’ll pass soon,” says Wright. But knowing that their last Christmas will be their best motivates him and drives his tireless work.

If you would like to donate the Sacramento Sheriff’s Santa Claus Project, contact Mike Wright at [email protected].

Vicki Newman
Victoria Newman is an author, speaker, and founder of How2LoveYourCop, an organization that provides positive resources for law enforcement families. She is author of A CHiP on my Shoulder and A Marriage in Progress, speaks all over the United States and Canada, mentors several spouses, and is a blogger and ghostwriter. Her website is: www.how2loveyourcop.com.

How To Mentally Survive Working as a Police Officer – Part 1

How to Cope When Life Gets Tough