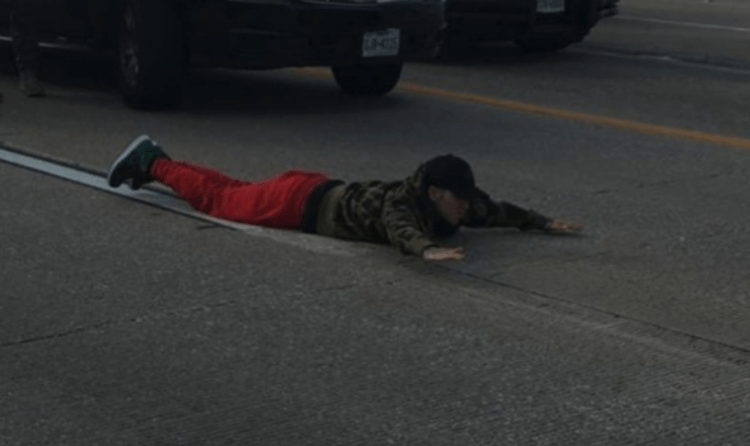 HOUSTON — The man accused of killing a Houston police sergeant is now in custody and a person of interest remains on the run.

Robert Soliz, 24, was arrested Tuesday 24 hours after the shooting death of Sgt. Sean Rios. He was arrested during a traffic stop on the Katy Freeway around 3:15 p.m.

“The video is clear. They know who they are,” said Acevedo. “We need this person in custody.”

The video, which was shown twice during the briefing, shows a man wearing a dark-colored T-shirt engaged in a conversation with Soliz. The two were seen standing next to a black pickup truck. The video later shows the truck driving off.

“We need this person to come forward,” said Acevedo. “He’s of great interest to us, and we’ve got to find that individual.”

According to court records obtained by ABC13, Soliz, who was placed in the handcuffs once belonging to Rios, was out on bond for unlawfully carrying a weapon in a motor vehicle on Feb. 15 when he was arrested.

He was given a $100 bail for that charge. In 2017, Soliz was accused of threatening his girlfriend at the time with murder.

Rios was killed Monday afternoon in the 7900 block of the North Freeway after police say he engaged Soliz in a gun battle. After being shot, Rios ran into the Taj Inn & Suites motel looking for help and collapsed. He was declared dead at the scene.

Our hearts are broken over the death of @houstonpolice Sergeant Sean Rios who was shot and killed during an exchange of gunfire this afternnon. We will never forget him and will see his 4 children, family and friends through this painful loss. RIP pic.twitter.com/QBHx2bymWY

Acevedo said Rios was headed to the airport for his 2 p.m. shift when he was involved in the shootout. Authorities and witnesses say the officer, who was wearing plainclothes, was shot multiple times.

A witness at the scene who heard the gunshots told ABC13 he saw the officer running toward the motel searching for help.

“He was just bleeding everywhere, all over, and just not running right. He entered the office at the motel and he collapsed right in there,” the witness said.

Acevedo said a memorial for Rios will likely be held on Monday. He said more information will be released on Tuesday.

On Oct. 20, Houston Police Sgt. Harold Preston was shot and killed while responding to a domestic violence situation. The 41-year veteran of the department, who was preparing to retire this year, was laid to rest on Oct. 30.

HOUSTON — A Houston police sergeant was shot and killed Monday afternoon after entering the parking lot of a hotel, according to reports.

Houston Police Chief Art Acevedo identified the fallen officer as Sgt. Sean Rios, 47, a 25-year veteran of the department. Acevedo said he leaves behind four children who are between the ages of 9 and 17 years old.

Mayor Turner joins @ArtAcevedo for a news conference on the shooting of HPD officer. https://t.co/hmByKtN1BA

HPD conducted an escort for Sgt. Rios that began at Little York Rd at North Interstate Highway 45 under the freeway and then inbound on the service road.

A reporter Houston’s Fox 26 cited sources who said the off-duty sergeant was shot around 1:30 p.m. in his vehicle after pulling into the parking lot of the hotel 7600 block of North Interstate Highway 45. The officer made it to the lobby where he died, he said.

Acevedo says they have leads on possible suspects including a black pickup truck and a blue four-door Mercedes Benz, which has been recovered.

He adds that HPD is looking for a Hispanic man in his mid to late 30s with several tattoos.

Police reportedly closed off the intersection of Interstate 45 and Gulf Freeway. Officers told motorists traveling on I-45 North to “expect delays and use alternative routes.”

Please keep our Sgt who was shot and killed this afternoon in your thoughts and prayers, along with their family and all Houston Police Officers. We will not stop until we find the monster/monsters responsible.

“We will not stop until we find the monster/monsters responsible,” Gamaldi tweeted.”

No further information was available at the present time.