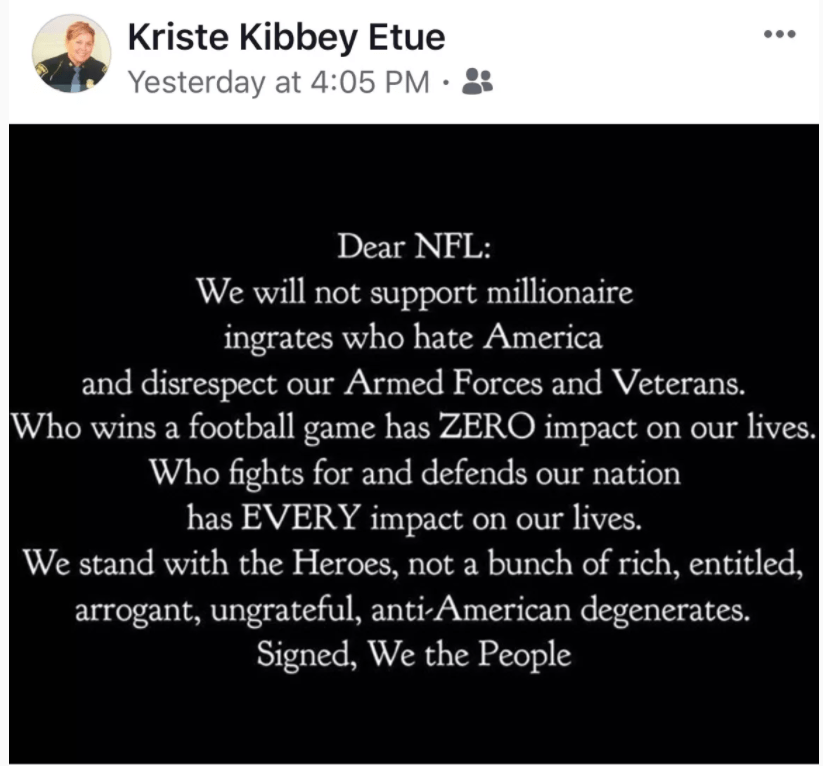 The director of the Michigan State Police has sparked a controversy by wading into the national debate over whether NFL players should stand for the national anthem through a strongly worded message she posted to social media.

A message shared by Col. Kriste Kibbey Etue on her Facebook page Sunday, in an apparent reference to athletes participating in anthem demonstrations, calls them “millionaire ingrates who hate America and disrespect our armed forces and veterans” and “a bunch of rich, entitled, arrogant, ungrateful, anti-American degenerates.”

Etue’s posting of the message  reportedly upset some black troopers in a department that has been under scrutiny for its lack of racial diversity.

Leonard Mungo, a Detroit attorney who has represented about a dozen black and white troopers in civil disputes with the department, said the posting demonstrates “kind of a dangerous mindset for someone in her powerful position.”

Shanon Banner, a spokeswoman for Etue, said the colonel’s Facebook post was not about race, and was posted not publicly, but so that only Etue’s friends would see it.

“As a public servant, Col. Etue has great respect for the armed forces and those who fight to protect our freedoms, Banner said in an e-mail to the Free Press.

The Michigan State Police released a message from Etue on Tuesday night via Facebook that apologized for the post:

It was a mistake to share this message on Facebook and I sincerely apologize to anyone who was offended.

I will continue my focus on the unity at the Michigan State Police and in communities across Michigan.

Just so we understand.  Players that kneel for the National Anthem broadcast on national television don’t have to apologize but a state police director, who disagrees with the kneeling, and shares it to her friends does?