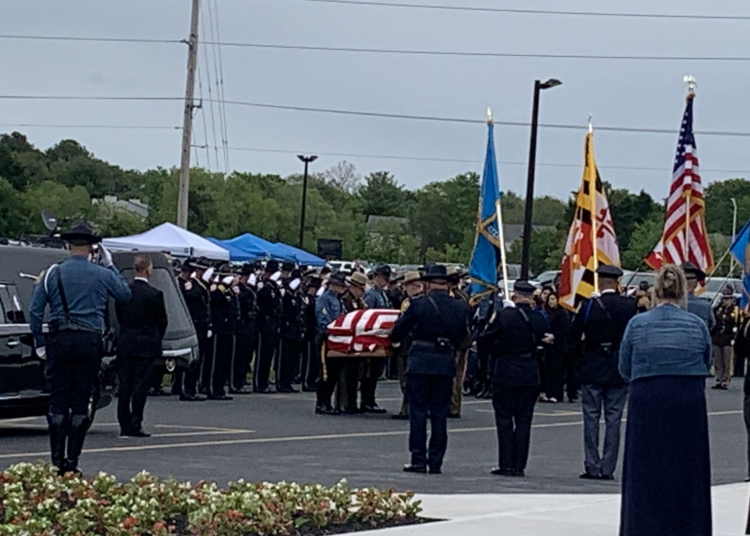 Hundreds of law enforcement personnel pay their final respects on Monday to Cpl. Keith Heacook who died in the line of duty a few weeks ago. (Maryland State Police)

DELMAR, Del. — A funeral was held Monday for the Delaware police officer who died at the hospital last month after suffering head injuries while responding to a call for help at a housing subdivision.

The body of Delmar Police Cpl. Keith Heacook, who was a 22-year veteran of the force, was transported from Short Funeral Home in Delmar, Delaware, to Emmanuel Wesleyan Church in Salisbury, Maryland, Monday.

Hundreds of law enforcement officials as well as members of the community, attended the funeral, Fox 5 DC reported.

Maryland Gov. Larry Hogan, Delaware Gov. John Carney, Delmar Police Cpl. Kevin McCahill, as well as family and friends, spoke at the service, WBOC reported. Photos showed uniformed Maryland State Police and Delaware State Police officers outside the church Monday, as the funeral was livestreamed on large screens outside for more to view. Officers saluted Heacook’s casket – seen draped in an American flag – while it was taken out of the hearse.

“He’s a devoted father, husband, son,” Maryland State Police spokesman Ron Snyder said in a statement Sunday. “Whenever this happens, whether it be a police officer in this case, a firefighter or trooper, the community rallies together and wants to make sure that we do all we can to ensure that everyone pays the proper respects to a fallen hero like this.”

Heacook suffered a traumatic head injury while responding alone to 911 calls shortly after 5 a.m. on April 25 about a fight in progress at the Yorkshire Estates Community in Delmar, Law Officer reported. Police said Randon D. Wilkerson, 30, of Salisbury attacked Heacook inside a home and also assaulted a 73-year-old man and a 76-year-old woman living across the street.

Heacook, a 54-year-old married father to a 12-year-old son, was first transported to TidalHealth Peninsula Regional in Salisbury, but was later taken to R Adams Cowley Shock Trauma Center, part of the University of Maryland Medical Center in Baltimore.

He was taken off life support three days later.

Country music star and Delaware native Jimmie Allen is expected to hold a concert at the Bottle & Cork in Dewey Beach around 7 p.m. Monday to raise money for Heacook’s family, WJZ reported. Maryland State Police has also raised $20,000 for Heacook’s son, according to Fox News.

Wilkerson was facing charges of attempted murder, assault, burglary, possession of a deadly weapon while committing a felony and terroristic threatening. His charges were to be upgraded to first-degree murder and assault following Heacook’s death, authorities said.