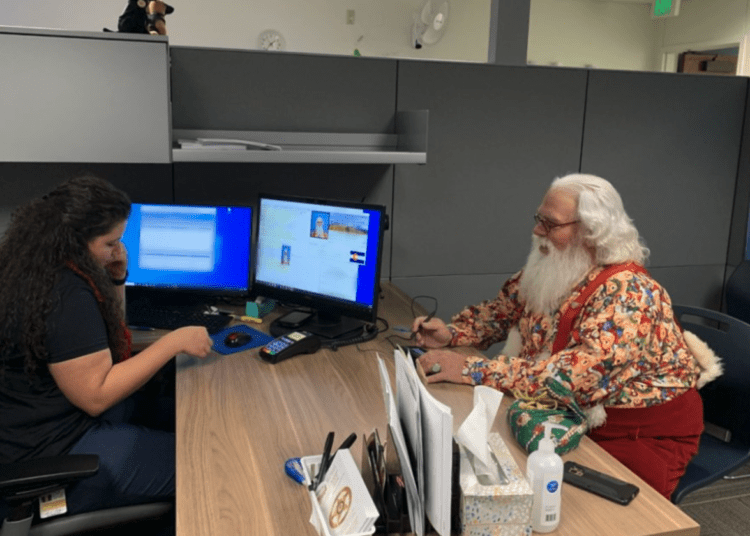 EL PASO COUNTY, Colo. — Sometimes law enforcement humor doesn’t resonate with the general public, and other moments the timing is off. A sheriff’s office in Colorado probably fell short on both fronts as they are getting heavily criticized after tweeting a photo of someone dressed as Saint Nick getting his concealed carry permit.

The picture — meant to promote staff personnel — showed a white-haired and bearded Kris Kringle wearing a Christmas-themed shirt under red overalls as he sat with an administrative member of the El Paso County Sheriff’s Office, the New York Post reported.

Guess who came in to receive his Concealed Handgun Permit today? 🎅

Did you know the El Paso County Sheriff's Office has issued 49,750 Concealed Handgun Permits with another 2,560 awaiting to be issued?

Social media users quickly responded and lashed out at the agency with more than 1,400 responses, slamming the idea that Santa would desire a concealed carry permit as his own holiday gift.

We’ll spare you the negative comments highlighted in the Post article, but one in particular demonstrated the timing was off following the mass shooting at a Michigan high school earlier in the week where Ethan Crumbley, 15, is charged with murdering four people and wounding seven others.

“I’m sitting here in downtown Oxford, MI, waiting for the candlelight vigil to start to pay tribute to 4 students who were murdered by a handgun smuggled into the school. But by all means, tell kids Santa carries a concealed weapon,” Joseph Johnson tweeted.

Eathan Crumbley’s parents, James and Jennifer Crumbley, have also been charged with manslaughter after buying the firearm for the troubled teen days before the shooting, Law Officer reported.

The staff at Law Officer does not want to be “tone-deaf” during the heartache experienced in Oxford, but we cannot lose sight that it was a very disturbed individual who killed fellow students, the firearm was simply “the vehicle,” just as it is a tool to defend more than 2 million people annually.

Last we checked, people were still lining up at the Department of Motor Vehicles to receive a driver’s license after Darrel Brooks used an automobile to mow down parade participants in Waukesha, Wisconsin last month, killing six and injuring about 60 others.

The sheriff’s office responded to the social media backlash with a follow-up explaining they were simply attempting to use Santa to get the word out about their staff’s work during the holiday season, the Post reported.

“EPSO intended to highlight our staff in the Concealed Handgun Permit Office, not to be insensitive,” the agency tweeted. “Santa correlates to the month of December and we thought he would help to recognize our hard working staff.”