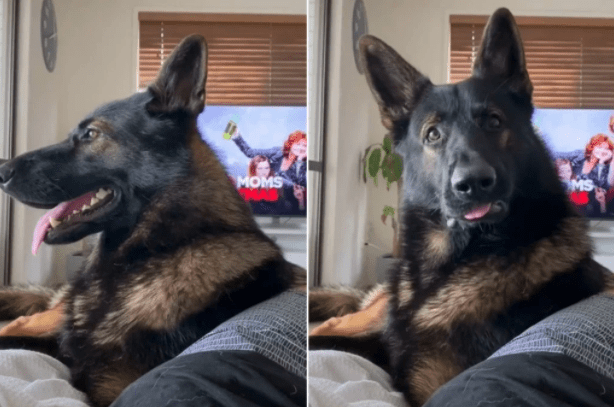 Retired Australian police K9 Dante proved that his detective skills are still on point after hilariously perking up upon hearing the word “cocaine.”

A TikTok video of the uproarious reaction was first posted in March — but is currently going viral with more than 2.5 million views. Various ripped versions of the doggone clip have amassed up to 30 million more views, Newsweek reported.

However, the funny footage was first shared on TikTok by Queensland’s Davey Rutherford, who adopted Dante after he retired from the force.

In the clip, captioned “sniffer dog knows English,” the German shepherd can be seen panting on a bed while Rutherford rattles off his shopping list.

However, the K9’s demeanor quickly shifts when the owner tries to slip in an illegal substance as a goof.

Upon hearing the name of a controlled substance, Dante reflexively whips his head around and flashes Rutherford a deadly serious look — as if to let him know that he crossed the line, the Post reported.

Fortunately, the dog’s owner is quick to let him know he’s “just kidding.”

“Once a police dog always a police dog,” one impressed Twitter user tweeted along with a ripped version of the video that’s racked up more than 60,000 additional views as of Tuesday morning.

“I have just watched this 3 times to see the face,” remarked one TikTok fan of the dog’s drug-busting mean mug.

“He was like you know I’m ex police right,” wrote another user.

Highly identifiable fugitive captured after weeks on the run

Police: If You Lost Your Cocaine At Sam’s Club, Call Us